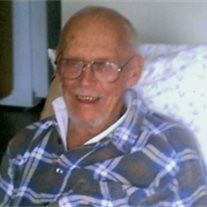 ALBERT JAMES SEAVOY, age 74, passed away Friday, September 12, 2008 at his residence following a lengthy illness. He was born in L'Anse on March 1, 1934 the son of the late Lloyd and Marie{Dahl) Seavoy. Jim graduated from L'Anse High School in 1952. He served in the US Air Force during the Korean Conflict. Jim was employed by the US Postal Service as a mail carrier and then owned and operated his own insurance business. He married Clintia Hascall in 1979. She preceded him in death. Jim was a member of Sacred Heart Catholic Church, L'Anse, the L'Anse American Legion Post 144, the L'Anse VFW Post #3897 and the Disabled American Veterans. His leisure activities included spending time at his camp by the lake and trips to the casino. Jim was a frequent contributor to the L'Anse Sentinel "letters to the editor". Mr. Seavoy is survived by his loving daughters, Katy Allen of Brandenton, FL, and Tammy Seavoy and friend Everett Ekdahl of L'Anse, grandchildren, Timothy Coombs of Anna Marie Island, FL., Nicole Collins of Eagle River, WI., and Michael Williams of L'Anse, great grandchildren, Autumn and Summer, brothers, Lloyd Seavoy of Skanee, and Tom Seavoy of Seattle, WA., and sister, Marie Coburn of Galesburg, MI., and his special friend, Pat Velmer of Baraga. Numerous nieces, nephews and cousins also survive. He was preceded in death by a brother. Funeral services for Mr. Seavoy were held at 11 a.m. Tuesday, September 16, 2008 at the Reid Funeral Service and Chapel, L'Anse with Father George Maki officiating. Interment took place in the L'Anse Evergreen Cemetery. The family greeted friends at the funeral chapel on Monday, September 15, 2008 from 6 until 8 p.m. and on Tuesday from 10 a.m. until the time of the service. Baraga County Area Veterans, under the direction of the Baraga American Legion Post 444 conducted military honors on Monday evening at 7 p.m. followed by a parish prayer service at 8 p.m.

ALBERT JAMES SEAVOY, age 74, passed away Friday, September 12, 2008 at his residence following a lengthy illness. He was born in L'Anse on March 1, 1934 the son of the late Lloyd and Marie{Dahl) Seavoy. Jim graduated from L'Anse High School... View Obituary & Service Information

The family of ALBERT JAMES "JIM" SEAVOY created this Life Tributes page to make it easy to share your memories.