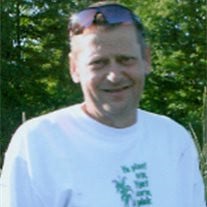 ANTHONY R. “TONY” SELKEY, 52, of Baraga passed away on Wednesday, January 27, 2010 at Marquette General Hospital where he had been a patient for 2 days. He was born in L'Anse on August 16, 1957 the son of the late Robert and Gladys (Anderson) Selkey. Tony graduated from Baraga High School in 1975. He married the former Kathleen Baril in L'Anse on November 23, 1986. He was a member of Holy Cross Lutheran Church in Baraga. Tony was the owner and president of Selkey Manufacturing Inc. since 1992. Tony was past president and current member of the Baraga County Road Commission, past president of the Baraga County Community Foundation and active in the Copper Country Humane Society. Tony devoted his time, energy and resources to any activity or organization that benefited the community. He championed youth oriented sports including golf, hockey and other sports and was always a willing sponsor for any cause that helped the Baraga area schools. Tony loved his dogs and carrying on the family tradition which proclaimed him the “sweet corn king” Mr. Selkey is survived by his loving wife Kathleen, children Kenny King of Baraga, T.J Selkey of Baraga and Kristine (Wyler) Miller of Pelkie, grandchildren Makenna and Bree Miller, sisters Liz Selkey of Keweenaw Bay and Bethany (John) Preston of Baraga, two aunts and several nieces,including his special niece Sheryl, nephews, great nephews and cousins. He was preceded in death by his brother “Butch' in 2006, and nephews, Josh, Jason, Peter, Michael and brother-in-law Donald. Funeral services for Mr. Selkey were held at 2 p.m. Saturday, January 30, 2010 at the Reid Funeral Service and Chapel, L'Anse with Pastor John Henry officiating. Interment will take place in the Baraga cemetery. The family greeted friends at the funeral chapel on Saturday from 12 noon. until the time of the service. Following the service the family invited friends to join them for fellowship and a luncheon at the Baraga American Legion Post 444.

The family of ANTHONY "TONY" R. SELKEY created this Life Tributes page to make it easy to share your memories.