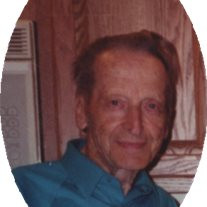 ARTHUR ERNEST JUNTUNEN, age 95, of Baraga passed away suddenly on Sunday, November 13, 2011 at Baraga County Memorial Hospital. He was born in Calumet Twp. on May 23, 1916 the son of the late August P. and Elma K. (Keranen) Juntunen. Arthur lived in the Laurium/Hubbell area for several years before moving to Painesdale. He then lived in Chicago and Detroit. Arthur entered into the U.S. Army in September of 1942. He was employed by the Grand Trunk Railroad in Chicago. He later worked for the U.S. Postal Service in Chicago and Colorado, retiring in November of 1977. Arthur married the former Gloria Arline Howard in Chicago in September of 1952. She preceded him in death in 1972. He then married the former Anne Marie Tahtinen in Pelkie on July 8, 1976. Arthur was a member of Lakeside Covenant Fellowship Church, Baraga. Mr. Juntunen is survived by his loving wife Anne, grandchildren Kristi, Ginger, Lori, and Jeff, great grandchildren Jacob, Emma, Jonathon, Robert, and Brianna, sister Bertha Hart of MN, and several nieces and nephews and other family members. He was preceded in death by his 2 brothers. Funeral services for Mr. Juntunen were held at 1 pm, Thursday, November 17, 2011 at the Reid Funeral Service and Chapel, L’Anse with Pastor Dave Hoover officiating. Interment took place in the Mountain View Cemetery, South Range. The family received friends at the funeral chapel on Thursday from 11 am until the time of the service. Baraga County area Veterans, under the direction of the Baraga American Legion Post 444 conducted military honors at the funeral chapel at 12:30 pm on Thursday. Following the funeral service friends were invited to join the family for fellowship and a luncheon in the Harrington Gathering Room, located at the funeral chapel.

ARTHUR ERNEST JUNTUNEN, age 95, of Baraga passed away suddenly on Sunday, November 13, 2011 at Baraga County Memorial Hospital. He was born in Calumet Twp. on May 23, 1916 the son of the late August P. and Elma K. (Keranen) Juntunen. Arthur... View Obituary & Service Information

The family of ARTHUR E. JUNTUNEN created this Life Tributes page to make it easy to share your memories.

Send flowers to the JUNTUNEN family.