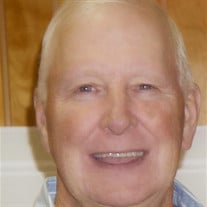 Albert M. “Sonny” Ellenich, Jr. age 74, of Baraga, passed away Friday, November 17, 2017 at Bayside Village, L’Anse. Sonny was born in Baraga, MI on August 29, 1943 the son of the late Albert and Veronica “Verna” (Hebert) Ellenich. He attended school in Baraga and then served in the National Guard. On October 17, 1964 he married the former Margaret Bobich at St. Ann's Catholic Church, Baraga. Sonny had been employed at the former Celotex Corp as a truck driver and retired after 44 years of service. He was a member of St. Ann’s Catholic Church, Baraga. Sonny enjoyed fishing, bird hunting, taking rides with Margaret, gardening, pickling, canning and could fix just about anything. Sonny is survived by his loving family, wife Margaret of Baraga, children Albert Ellenich of Chicago, Michael Ellenich of L’Anse and Tammy (Steve) Rajala of Covington, grandchildren Valerie, Justin, Alec and Antonia and his sister Mary “Marcy” Supanich of L’Anse. He is also survived by several nieces, nephews, cousins and brother and sisters-in-law. He was preceded in death by his parents and his sister Doane Sauvola. A Mass of Christian burial was celebrated at 11:00 a.m. on Monday, November 20, 2017 at St. Ann’s Catholic Church, Baraga with Father Corey Litzner, celebrant. The family received friends at the church on Monday from 10 a.m. until the time of the Mass. Immediately following Mass, interment took place in the Baraga Cemetery. A luncheon was served in the church hall following the interment. The Reid Funeral Service and Chapel, L'Anse is in charge of the funeral arrangements.

The family of Albert M. "Sonny" Ellenich Jr. created this Life Tributes page to make it easy to share your memories.

Customized sympathy cards. Mailed for you.