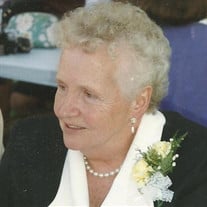 Arline VanBuren, 95, of Skanee, Michigan, passed away peacefully in the presence of her family at Bayside Village in L’Anse on August 8, 2019. She was born on July 1, 1924, in Morse, Wisconsin, daughter of the late Arthur and Jennie McDonald. She and her twin sister Irene were members of the last graduating class of Pequaming High School in 1942. Arline led a life filled with love for her family, music and church. She was a popular guitarist and singer who performed throughout her life at dances, senior centers, nursing homes, family gatherings, Zion Lutheran Church and other public venues. Her talent was showcased for many years at the Aura Jamboree where she and her musical partner Joe Majeski are honored on the Wall of Fame. Arline also enjoyed swimming and cross country skiing. An active volunteer in the community, Arline was awarded Citizen of the Year in 2006 by the Baraga County Kiwanis. She gave her time and talent to the Zion Lutheran Church, Arvon Township Historical Society, Arvon Township Fire Department Auxiliary, Baragaland Senior Citizens, and the VFW Auxiliary. She also served as Arvon Township clerk and trustee. Arline was preceded in death by her husband Ray VanBuren, daughter Doris Cote, and two brothers and three sisters. She is survived by her children Wayne Abba, Timothy VanBuren, Clint (Jane) VanBuren, Clay VanBuren, Vanessa (Tim) Houle -- all of Skanee, and Jennie Weiger of Sparks, Nevada, Warren (Cindy) VanBuren of Oconto, Wisconsin, and Mark (Kathy) VanBuren of Lakeside, California. She is also survived by numerous grandchildren, great grandchildren, nieces and nephews. Visitation will be held on Saturday, August 24, 2019, 9-11 a.m., at Zion Lutheran Church in Skanee, followed immediately by a memorial service, luncheon and inurnment in the Skanee Cemetery. Her sons will serve as honorary pallbearers. Donations in her memory may be made to Zion Lutheran Church, 13511 Roland Lake Road, Skanee, MI 49962. Arline’s obituary may also be viewed and condolences sent to the family at www.reidfuneralservicechapel.com. The Reid Funeral Service and Chapel has been entrusted with the funeral arrangements.

Arline VanBuren, 95, of Skanee, Michigan, passed away peacefully in the presence of her family at Bayside Village in L&#8217;Anse on August 8, 2019. She was born on July 1, 1924, in Morse, Wisconsin, daughter of the late Arthur and Jennie McDonald.... View Obituary & Service Information

The family of Arline Van Buren created this Life Tributes page to make it easy to share your memories.