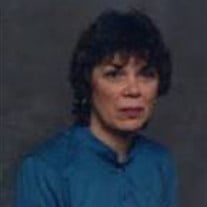 BARBARA L. RABY, age 71, of Covington passed away following a lengthy illness at her residence on Thursday, February 14, 2013 with her family by her side. She was born in Covington on March 6, 1941 the daughter of the late William and Vendla Hemminger. Barb graduated from L’Anse High School in 1959. She married James Raby in Covington in 1959. He preceded her in death on August 5, 2004. Barb was the L’Anse director of the United States Department of Agriculture until her retirement. She was a member of Trinity Lutheran Church, lifetime member of Covington VFW Ladies Auxiliary, former member of the Covington School Board, and was the bar manager for the Covington VFW. Barb was an avid radio trivia fan, she enjoyed gardening, bowling and was a member of Baraga County Women’s Bowling League, she played 1st base for Baraga County Baseball League, and enjoyed working on the farm. She was known for her Waldorf salad that she made for special occasions, and most of all she loved her family and great grandchildren. Mrs. Raby is survived by her daughters Julie Raby (Larry) of Baraga and Charlene Raby of Covington, grandchildren Jackie and Nick Grice, Jenny, Vicki and Randy, and Alyssa, great grandchildren Kodie, Morgan, Dylan, Tyler, Ryan, and Ella, brother William (Susie) Hemminger of Covington, half-brother Melvin (Collie) Hemminger of Waterford, and sister Dorothy (Slim) Morris of Clarkston. Numerous nieces, nephews, cousins, and other family members also survive. She was preceded in death by her grandson James, and sister Lillian. A memorial funeral service was held at 12 noon on Monday, February 18, 2013 at Trinity Lutheran Church, Covington with Pastor Mark Reinsch officiating. The family received friends at the church on Monday from 11 a.m. until the time of the service. Following the memorial funeral service, the family invited friends to join them for fellowship and a luncheon at the Covington VFW Post #8945. Spring interment will take place in the Covington Cemetery.

BARBARA L. RABY, age 71, of Covington passed away following a lengthy illness at her residence on Thursday, February 14, 2013 with her family by her side. She was born in Covington on March 6, 1941 the daughter of the late William and Vendla... View Obituary & Service Information

The family of BARBARA L. RABY created this Life Tributes page to make it easy to share your memories.

BARBARA L. RABY, age 71, of Covington passed away following a...