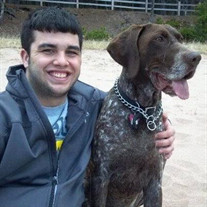 Benjamin Jerald “Ben” Lytikainen, age 25, of L’Anse passed away unexpectedly on Tuesday, October 18, 2016. He was born in Arlington, Texas on March 7, 1991 the son of Michael and Sandra (Taylor) Lytikainen. Ben attended Crofton Elementary School in Nebraska, L’Anse Middle School and graduated with the class of 2009 from Baraga High School. He had worked as a heavy equipment operator in the construction industry. Ben was a member of United Lutheran Church, L’Anse. When he was younger he had played baseball and football. Ben loved being in the outdoors, hunting, fishing, golfing, motocross, and snowboarding were a few of the activities he enjoyed. Ben was an avid Green Bay Packer fan. Ben is survived by his loving family; his parents Michael and Sandra Lytikainen of L’Anse, brothers Christian (Michelle LaBeau) and Mike both of L’Anse, grandmother Connie Lytikainen of L’Anse, uncle Tom Lytikainen of L’Anse, aunt and uncle Bill and Corie Lytikainen of L’Anse, uncle George Taylor of Hondo, Texas and many extended family members in Texas and Florida. He was preceded in death by his grandfather Gerald Lytikainen, grandfather George Sidney Taylor, and grandparents BJ and Kathleen Pearson. A memorial service for Ben was held at 7:30 p.m. on Monday, October 24, 2016 at the Reid Funeral Service and Chapel, L’Anse with Pastor John Ansell officiating. The family greeted friends at the funeral chapel on Monday from 5:30 p.m. until the time of the service. Honorary pallbearers for Ben were, Christian Lytikainen, Mike Lytikainen, Cameron Aten, Jordan Nelson, Michael Williams, Josh Larson and Dylan Tollefson. Immediately following the memorial service, the family invited friends to join them for fellowship and a late evening meal in the Harrington Gathering Room, located at the funeral chapel.

The family of Benjamin J. "Ben" Lytikainen created this Life Tributes page to make it easy to share your memories.

Send flowers to the Lytikainen family.