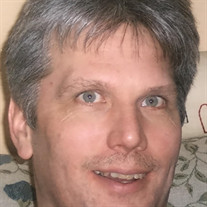 Brian Anthony Wadaga, age 54, of Baraga, passed away unexpectedly Monday, March 27, 2017. He was born in L’Anse, MI on February 5, 1963 the son of Raymond and Peggy (DeCook) Wadaga. Brian attended school in Baraga and graduated from Baraga High School in 1981. He married the former Angel Laitila in Pelkie in 2000. Brian was a member of St. Ann’s Catholic Church, Baraga. He had worked at Baraga County businesses his entire life, and landed his “dream job’ in May of 2002 with the Village of Baraga Water Plant, and had become the water plant supervisor. Brian loved sports, especially football. He enjoyed the outdoors and watching wildlife, fishing and woodworking. Brian is survived by and was the devoted husband to Angel (Laitila) Wadaga, his mother Peggy Wadaga, brothers Gary (Linda) Wadaga, Ronald (Cathy) Wadaga, Patrick (Cindy) Wadaga and sister Mary (Brennan) Bedner all of Baraga, nephews and nieces Jason Turunen (Jen Johnson), Kendra (Corey) Ash, Brandon (Joy) Turunen, Kyle (Brittany) Wadaga, Brad Wadaga (Brooke Mleko), Timmy Wadaga and his fiancé Stephanie Sauvola, Daniel Wadaga (Stephanie Juntti), Jaclyn Wadaga and Erica and Kelly Bedner. He loved his nieces and nephews as if they were his own. He is also survived by his mother-in-law and father-in-law Sue and Wes Laitila of Keweenaw Bay, sister-in-law Sarah Laitila (Jerry Tervo) and his precious “four legged babies” Willow and Siiri. He was preceded in death by his father, Raymond Wadaga. Funeral services for Brian were held at 1 p.m. Saturday, April 1, 2017 at the Reid Funeral Service and Chapel, L’Anse with Father Corey Litzner and Deacon John Cadeau officiating. The family greeted friends at the funeral chapel on Saturday from 10 a.m. until the time of the service. Immediately following the funeral service, the family invited friends to join them for fellowship and a luncheon at St. Ann’s Catholic Church in the church hall. Interment will take place in the Baraga Cemetery. At the time of his passing, Brian was a registered organ donor. His corneas were donated to The Gift of Life, making it possible for two recipients to regain their vision. Brian was a very special person, who touched the lives of so many. He was a fun-loving, humorous guy who loved playing practical jokes on his family. He was the life of any get-together and was the first person anyone could call on in their time of need. Brian was simply put on this earth to prove that life is too short, and to make the most of each and every day.

Brian Anthony Wadaga, age 54, of Baraga, passed away unexpectedly Monday, March 27, 2017. He was born in L&#8217;Anse, MI on February 5, 1963 the son of Raymond and Peggy (DeCook) Wadaga. Brian attended school in Baraga and graduated from Baraga... View Obituary & Service Information

The family of Brian Anthony Wadaga created this Life Tributes page to make it easy to share your memories.

Send flowers to the Wadaga family.