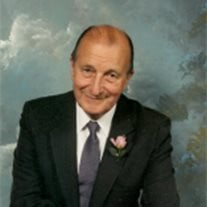 Carl Mathew Lytikainen, 89, of Baraga passed away at the BCMH Skilled Nursing Facility (SNU) in L'Anse, Michigan on 24 February 2006. Kaarlo Matttias was born at the train station roadhouse in Pelkie, Michigan on 27 January 1917. He was preceded in death by his parents Aaro Frederic and Hilma (Koivisto) Lytikainen, and his four brothers Hjalmer, Fred, Laurie and Richard. Carl is survived by his wife Nana (Huovinen) Lytikainen of 66 years, who resides at the SNU. Carl and Nan were married by Rev. Dr. Rautalahti in Waukegan, IL on September 16, 1939, after a whirlwind courtship of one month and 10 days. Carl had just returned from a stint with Standard Oil in the Caribbean, Venezuela, and Aruba and was working in Chicago. Carl and Nan have been blessed with good friends, good health, and a loving family. Son Robert (Noreen) Lytikainen, of Keweenaw Bay and Annapolis, MD, daughters Karen (David) Aho, of Duluth, MN, and Paulette (Paul) Heikkinen of Baraga. The 10 grand-children are; Robert (Lori) Aho of Duluth, MN, Carl (Beth) Lytikainen of Scottsdale, AZ, Erik (Lysa) Lytikainen of Columbia, MD, Mrs. Ken (Terri Aho) Maki of Marquette, Scott Heikkinen of Hancock, Mrs. Joe (Melissa Heikkinen) Wahlberg of Iron River, Michael Aho of Duluth, MN, Mark Lytikainen of Montclair, VA, Mrs. Kory (Diana Heikkinen) Whiting of Hancock, and Steven Heikkinen of Baraga. The 17 great-grandchildren are; Mathew, Alex, Amanda and Emily Aho, Brian, Sarah and Amy Maki, Sarah and Taylor (Carl) Lytikainen, Megan and Lauren Wahlberg, Jonathan, Katherine, David and Luke (Erik) Lytikainen, and Jared and Lindsey Whiting. Carl was a welder and pipe fitter who worked with Sherwin Williams in Chicago before serving in the Army. Tech Sgt (T/5) Lytikainen served overseas in Germany during WWII. After the war he returned to Pelkie where he farmed and ran a gas station and repair shop before going on construction at Calumet Radar Station, the White Pine Mine, and on building the Mackinaw Bridge. He and his family moved to and have resided in Baraga since 1954 when he worked on the Celotex construction project and later when it opened he worked as wet end supervisor. He returned to construction work in the early 1960s on the Baraga Armory, several major projects at K.I. Sawyer AFB, Michigan Tech, Republic Mine, Suomi College, Northern Michigan and others. His last project before retirement was the Baraga High School. Over the years he was a member of the Baraga School Board, Copper Country Intermediate School District Board, Baraga Housing Authority, Lions, VFW, American Legion, Masons, and Holy Cross Lutheran Church Council, In between visiting shut-ins, Camp Holler, hunting camp pinochle games, ice fishing, making wood and picking blueberries with his grandchildren, he and Nana together visited every one of the 50 states in our grand union. Funeral services for Mr. Lytikainen were held at 12 noon on Saturday, March 4, 2006 at Holy Cross Lutheran Church, Baraga with Judy Mattson officiating. Spring interment took place on May 23, 2006 at 11 a.m. in the Pelkie Cemetery. The family received friends at the church on Saturday March 4, 2006 from 11 a.m. until time of the service. The Reid Funeral Service and Chapel, L'Anse has been entrusted with arrangements.

Carl Mathew Lytikainen, 89, of Baraga passed away at the BCMH Skilled Nursing Facility (SNU) in L'Anse, Michigan on 24 February 2006. Kaarlo Matttias was born at the train station roadhouse in Pelkie, Michigan on 27 January 1917. He was preceded... View Obituary & Service Information

The family of CARL M. LYTIKAINEN created this Life Tributes page to make it easy to share your memories.

Carl Mathew Lytikainen, 89, of Baraga passed away at the BCMH...