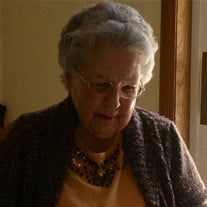 CLOVER M. PEKURI, 92, of L’Anse, passed away Friday, July 12, 2013 at Baraga County Memorial Hospital, L’Anse. She was born in Kiva, MI on July 6, 1921 the daughter of the late Oliver and Iva (Simmons) Scott. Clover attended schools in Marquette County. She married John Pekuri in Humbolt, MI on December 11, 1948. He preceded her in death in 1981. Clover was a member of American Legion, Champion Post and was of the Lutheran faith. She enjoyed doing crafts, carpentry, quilting, and anything outdoors. You never saw her outdoors without her husband working together. Mrs. Pekuri is survived by her daughters Iva (Michael) Lummukka of Skanee, Doreane Moon of Florida, Judy Wells of St. Peter, FL, Janet Sharon of Coeur d’Alene, Idaho, and Linda (Bud) Moe of L’Anse, 17 grandchildren, and numerous great grandchildren. She was preceded in death by a grandson, a great grandson, 3 sisters, 1 brother, and her stepbrother Edwin. Funeral services for Mrs. Pekuri were held at 11 a.m on Thursday, July 18, 2013 at the Reid Funeral Service and Chapel, L’Anse with Pastor Michael Carriere officiating. Interment will take place in the Champion Cemetery. The family greeted friends at the funeral chapel on Thursday from 10 a.m. until the time of the service. Following the funeral service, the family invited friends to join them for fellowship and a luncheon in the Harrington Gathering Room, located at the funeral chapel.

The family of CLOVER M. PEKURI created this Life Tributes page to make it easy to share your memories.