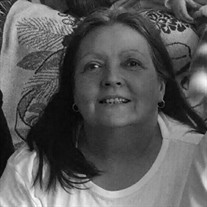 Cheryl A. “Sherry” Massie, age 66, of Baraga, passed away unexpectedly Tuesday, October 13, 2015 at Baraga County Memorial Hospital, L’Anse. She was born in L’Anse on March 27, 1949 the daughter of the late William “Bill” and Dorothy (Springsteen) St. George. Sherry graduated from L’Anse High School in 1967. She married Robert “Bob” Massie at Sacred Heart Catholic Church, L'Anse on May 16, 1970. Sherry was a member of Sacred Heart Catholic Church, L’Anse and Keweenaw Bay Indian Community. She loved her family and was their “protector”, enjoyed going for rides including going for coffee and to the casino and listening to music, especially Journey. Sherry is survived by her loving husband Bob, children Kristine (Bill) Kunick and Denise Massie all of Baraga, grandchildren Kayla, Derek and Ella, great grandchild Emma, brothers Bill St. George and Fred (Bev) St. George both of L’Anse, sisters Debbie (Jim) Bennett of L’Anse, Brenda (Roger) Turunen of Baraga and Michelle (Steve) Synkelma of Ironwood. Numerous nieces, nephews and cousins also survive. She was preceded in death by her parents. Funeral services for Sherry were held at 11 a.m. Friday, October 16, 2015 at the Reid Funeral Service and Chapel, L’Anse with Father Corey Litzner officiating. The family greeted friends at the funeral chapel on Friday from 10 a.m. until the time of the service. Immediately following the funeral service, the family invited friends to join them for fellowship and a luncheon in the Harrington Gathering room, located at the funeral chapel. Interment took place in the Baraga Cemetery.

The family of Cheryl A "Sherry" Massie created this Life Tributes page to make it easy to share your memories.

Cheryl A. “Sherry” Massie, age 66, of Baraga, passed away unexpectedly...

Send flowers to the Massie family.