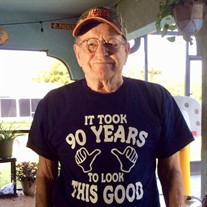 Clayton L. “Foozy” Collins, age 92, of L’Anse, Michigan passed away on Monday, March 18, 2019 at the D.J. Jacobetti Home For Veterans, Marquette, Michigan. He was born in the Point Iroquois Lighthouse in Brimley, Michigan on September 14, 1926, to James Collins and Laura (Kalnbach) Collins. Foozy graduated from L’Anse High School and then joined the U.S. Army and served his country transporting troops during WWII. Following his honorable discharge, he married the former Joyce E. Fladeland on July 25, 1953 in L’Anse, Michigan. Joyce preceded him in death in 1994. Foozy worked at Kearney and Trecker in Milwaukee, Wisconsin as a machinist, then moved back to L’Anse and owned and operated “Clay’s Phillips 66” gas station, where the Frostie Freeze now sits. He then worked as grounds keeper at the L’Anse Golf Club until he retired. He was a member of the L’Anse VFW Post #3897 and the L’Anse American Legion Post 144. Foozy enjoyed spending time at his camp in Skanee, fishing, hunting and feeding the deer that became his pets. He also loved spending his winters in Florida with his daughter, son-in-law and grandchildren. He enjoyed playing endless cribbage games with his son-in-law and going to his granddaughter Nikki’s “Java By The Bay” coffee shop and visiting with everyone. Foozy is survived by his loving son Patrick Collins of Skanee, daughter Joni (Steven) DeMerse of Port Charlotte, Florida, grandchildren Nicole Collins of L’Anse, Darcie LaBerge (Michael Kordas) of Port Charlotte, FL and Carly and Cody DeMerse of Port Charlotte, Florida, great grandchildren Autumn Kahkonen and Summer Dudo of L’Anse and Caysen Kordas of Port Charlotte, Florida, several nephews and a niece. He was preceded in death by his loving wife Joyce, his parents, brother James and sisters, Marjorie, Laurel and Marilyn. A elebration of life will be held from 4 p.m. until 7 p.m. on Thursday, July 11, 2019 at the Reid Funeral Service and Chapel, L’Anse. Military honors will be conducted at the funeral home at 6:30 p.m. Foozy will then be taken to the Huron Islands where he grew up as a child as his father was a lighthouse keeper for the U.S. Coastguard. Then he will be laid to rest with his loving wife, Joyce, in the L'Anse Evergreen Cemetery. The Reid Funeral Service and Chapel, L’Anse has been entrusted with the funeral arrangements

The family of Clayton L. "Foozy" Collins created this Life Tributes page to make it easy to share your memories.

Send flowers to the Collins family.