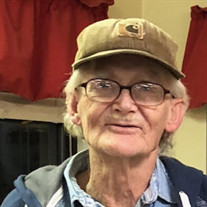 Curtis D. Kallio, age 71 of Watton, MI, passed away peacefully on Thursday, June 10, 2021 after a courageous battle with cancer. Born in Duluth, MN, as an infant, he moved to Watton, MI where he was raised and attended local schools. Early in adulthood, he worked as a woodsman and mink farmer before later moving for factory work at American Brass in Kenosha, WI. In his 30’s he returned to Watton where he returned to working in the woods, as he owned and operated CDK Firewood until his retirement. Curtis is preceded in death by his Birth parents, Irene and Emil Sunnarborg, parents Irene and Onnie Kallio, siblings Rodney Sunnarborg, Dennis Sunnarborg, Delores Jokela, and infant daughter Brittany. Mr. Kallio is survived by his loving wife, Lori (née Palovaara) Kallio, sister Charolette Bain, step-brothers, Lloyd Rontti of Esko, MN, Don Rontti of Loveland, CO., and Harvey Rontti of Coon Rapids, MN, sons Charles Kreuser, of Hollywood, CA, Lieutenant Colonel T. L. Kreuser (US Army Retired) of Clarksville, TN, and Matthew White of Round Rock, TX and daughters Tina Kreuser of Wausau, WI and Bridget Kallio of Ishpeming, MI. Curtis had nine grandchildren; Kayla Kreuser and Danielle Siefert of Wausau, WI, Katherine Kreuser, Ad Kreuser, Emma Kreuser, Jasmine Kreuser and Zachary Kreuser of Clarksville, TN, and Nevaeh and Kobe White of around Rock, TX. He also had two great-grandchildren, Olivia Marten and Adrian Alsteen of Wausau, WI. A good, humble, Christian man, Curtis enjoyed watching wrestling on TV, Country and Western music, and tinkering in his garage. He loved his dog, Cody. He had an immense lifelong love of being outside and in the woods, as well as having coffee with friends at The Corner, sauna and travel. Graveside funeral services for Curtis will be held at 11 a.m. Friday, June 18, 2021 in the Covington Cemetery with Pastor Richard Little officiating. A luncheon will be held following the interment. The Reid Funeral Service and Chapel, L'Anse was entrusted with the arrangements.

Curtis D. Kallio, age 71 of Watton, MI, passed away peacefully on Thursday, June 10, 2021 after a courageous battle with cancer. Born in Duluth, MN, as an infant, he moved to Watton, MI where he was raised and attended local schools. Early... View Obituary & Service Information

The family of Curtis D. Kallio created this Life Tributes page to make it easy to share your memories.

Send flowers to the Kallio family.