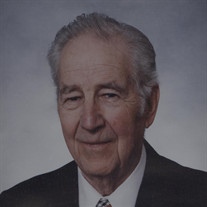 Curtis C. “Curt” Menard, age 98, of L’Anse passed away unexpectedly Sunday, November 29, 2015 at Baraga County Memorial Hospital, L’Anse. He was born in L’Anse on March 21, 1917 the son of the late Delore P. and Florence (Campbell) Menard. Curt graduated from L’Anse High School in 1934. He married the former June Olson in Houghton on April 6, 1935 in the parsonage of Grace Methodist Episcopal Church. She preceded him in death on September 21, 2000. Curt and June had owned and operated the Coast to Coast Hardware Store in L’Anse which he started in 1952. His son Larry carried on the business after Curt’s retirement in 1979. He was a member of Zeba Indian Mission United Methodist Church. Curt was member of the Sons of the American Revolution and past member of the Baraga County Community Foundation Board of Directors, retiring in 2002 after more than 10 years of service, had been a cub scout leader, had served on the Baraga County Memorial Hospital Board, Lions Club, Ottawa Sportsman Club, past Kiwanis Person of the Year, and a past member of the group that established the Green Hill Manor. Curt enjoyed listening to Lawrence Welk and taking his daily walks. Mr. Menard is survived by his loving children Philip “Ritchie” (Joyce) Menard of Pequaming, Jim Menard of Nome, Alaska and daughter Nancy Menard of L’Anse, daughters-in-law Virgie and Linda, 9 grandchildren, 20 great grandchildren and 1 great-great granddaughter. He was preceded in death by his parents, wife, sons Larry and Curtis D., grandson Curtis C., brothers Jack, Don and half-sisters Evelyn Fay Olm and Marion Graetzer Funeral services for Mr. Menard were held at 12 pm, Friday, December 4, 2015 at the Reid Funeral Service and Chapel, L’Anse with Reverend Steve Rhoades and Pastor John Henry officiating. The family greeted friends at the funeral chapel on Friday from 10 a.m. until the time of the service. Immediately following the funeral service, the family invited friends to join them for fellowship and a luncheon in the Harrington Gathering room, located at the funeral chapel. Spring interment will take place in the L’Anse Evergreen Cemetery. In lieu of flowers, donations in Mr. Menards honor may be directed to the Baraga County Community Fund’s Donald Menard Youth Endowment Fund or St. Vincent DePaul.

The family of Curtis C Menard created this Life Tributes page to make it easy to share your memories.

Send flowers to the Menard family.