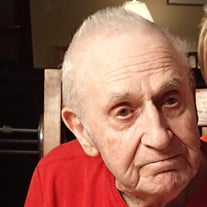 Cyril H. “Dave” Caspary, age 90, of Baraga, went to rest with the Lord on Monday, August 10,2015 at Jacobetti's Veterans' Home, Marquette, Michigan, with his family by his side. He was the beloved son of David and Ada (Marek) Caspary, born September 17, 1924, Houghton, Michigan. Cyril graduated from Baraga High School in 1942, entered service in the Army 1942 and fought in World War II, he was in the Battle of the Bulge, taken prisoner by the Germans December 1944 to 1945, and was marched in Germany's coldest winter 600 miles. He received his P.O.W. medal, was honorably discharged in 1945, and then attended Ferris Institute, Grand Rapids. Cyril worked at Chrysler's in Detroit, Celotex in L'Anse, and Pettibone, Baraga from which he retired. He was then able to enjoy time in the woods which he loved, fishing the streams. He was an excellent fly fisherman and always shared his catch with others. He was very patriotic, loved the Country he defended, was most generous to others. He was also entertaining, loved to sing and do impressions, had a really great sense of humor we all enjoyed. Cyril was a Detroit Red Wing fan, a Detroit Tiger fan, and greatly enjoyed watching local games. He also wrote humorous poems about his fishing trips and drew cartoons. He also had great Faith which sustained him. We will truly miss him. He is survived by his dear daughter, Carol (Joseph) Marinich of L'Anse: his granddaughter, Melissa Pellow, L'Anse; Grandson, Brad(Season) Marinich of Paw Paw, Michigan; his beloved great grandsons, Bryson and Barron Marinich of Paw Paw; and his dear sister, Mary (John) Rast of Kaukauna, Wisconsin; and several nieces, nephews, and friends. He was preceded in death by his wife, Jean LeClaire, his parents, his sister, Naomi (George) Getzen; his sister, Ruth (Bruce) Jacobs; and his sister, Patricia (Frank) Naren. Funeral services for Cyril were held at 6 p.m. on Thursday, August 13, 2015 at the Reid Funeral Service and Chapel, L’Anse. The family greeted friends at the funeral chapel on Thursday from 5 p.m. until the time of the funeral service. Baraga county area veterans, under the direction of the Baraga American Legion Post #444 conducted military honors at the funeral chapel at 5:30 p.m. Interment took place in the Baraga Cemetery. Memorials in Cyril's honor may be directed to Jacobetti D J Home for Veterans in Marquette.

The family of Cyril H Caspary created this Life Tributes page to make it easy to share your memories.

Send flowers to the Caspary family.