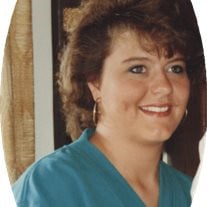 DIANE LYNN OSTERMAN, 42, of Baraga, passed away suddenly Sunday, January 16, 2011, at her home with her daughter Jenna by her side. She was born on May 31, 1968 in L’Anse, Michigan to John “Mike” Osterman of Cocoa Beach, Florida and Lynn Ross of Baraga, MI. As a young child she briefly lived in Sioux Falls, South Dakota and the remainder of her life in Baraga, MI. She attended and graduated from Baraga High School in 1987. Diane also attended the former Suomi College and Northern Michigan University. Her marriage to Andrew Heikkinen of Baraga produced three wonderful children- Darren 21, Andrea 18, and Jenna 14. Her children were the pride and joy of her life. The past ten years she and her “best friend” Roger Laitila enjoyed gardening, canning, making wood, hunting, fishing, traveling, daily saunas, and her three children. Diane will be missed by “Jack” her german shepherd dog. Surviving besides her parents is one brother, Dean (Sheila) Osterman and their four children- Carsyn, Jaden, Reide, and Cage Milton all of Baraga. Diane is also survived by her paternal grandmother Virginia L. Hanegan of L’Anse and uncle Pat (Lora) Osterman of Pequaming, her closest and most caring aunt Ann (Dominic) Picciano of Baraga, the LeClaire cousins- Jill, Tony, Gerrey, Kyle, Jeremy, Brad, Gina, and Dana. She was preceded in death by her maternal grandparents Milton and Mary Ross, paternal grandfather John “Jack” Osterman, uncles Tim and Tom Osterman and Terry Ross, and aunts Shirley and Mary Carol Ross. Funeral services for Diane were held at 1:30 pm, Friday, January 21, 2011 at the Reid Funeral Service and Chapel, L’Anse with Father John Longbucco officiating. The family greeted friends at the funeral chapel on Friday from 12 pm until the time of the service. Following the service, the family invited friends to join them for fellowship and a luncheon in the Harrington Gathering room, located at the funeral chapel.

The family of DIANE L. OSTERMAN created this Life Tributes page to make it easy to share your memories.

Send flowers to the OSTERMAN family.