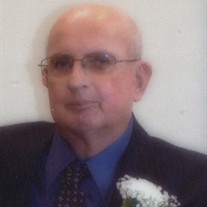 DONALD F. VIZINA, age 72, of Baraga, MI passed away Thursday, February 6, 2014, at Baraga County Memorial Hospital following a lengthy illness. He was born on the family farm in Baraga, MI on August 14, 1941, the son of the late Lawrence and Virginia (Cadeau) Vizina. He attended Baraga area schools and graduated from Baraga High School in 1959. Don worked various jobs and eventually worked for Pettibone Corp before entering the U.S. Army in 1964. In the Army his assignment was as a chaplain assistant. He was in charge of the religious educations of the Army officers’ children. Donald met his wife, the former Karen Collier at St. Ignatius Loyola Church at Fort Leavenworth, Kansas when she was a religion teacher. They were married on October 1, 1966 in Denver, CO. After being discharged from the Army, he worked for various companies, including North Central Airlines, Pettibone Corp, and Metropolitan Insurance Company. Don retired in 2000 from Prudential Insurance Company because of health problems caused by Parkinson’s disease and Chron’s disease. Don was active in local politics for a short time. He was Baraga Village President from 1984 until 1986. Don was instrumental with a group of other civic minded members to ascertain the Baraga Maximum Prison to be built in Baraga. He was also able to get the Besse Mill (formerly Connors Mill) to relocate in Baraga after the fire destroyed the mill in Bovine. Knowing Baraga would need lodging, he put together a group of civic minded members who eventually built the Baraga Lakeside Inn and hosted Governor Blanchard to Baraga County for its opening. Don was a member of St. Ann’s Catholic Church, Baraga, the Lumber Jack Committee, and the Knights of Columbus. He was the Grand Knight in the early 1970’s. Don loved spending time with his family, enjoyed being at the cottage at Sandy Lake, deer and bird hunting, and he always stuck by his Detroit Lions. He and Karen enjoyed traveling, they made many trips out west, Hawaii, Alaska, Mexico, Jamaica, and the Bahamas. He had planned to spend winters in Texas, but was unable to because of his health. Don is survived by his loving wife of 47 years, Karen, son Brian Vizina of Baraga, and daughters Michele Younggren and Monica Vizina both of Baraga, seven grandchildren Brian, Kyle, and Justin Vizina, Frankie, Carli, Erin, and Tyler Younggren all of Baraga, great grandson Weston Vizina of Baraga, two brothers Raymond (Ethel) Vizina and Russell (Kathy) Vizina of Baraga, two sisters MaryLou (Arvin) Prebelski of DePere, WI, and Helen Clisch of Baraga, and sister-in-law Dolores Vizina of Owatonna, MN. Many nieces, nephews, and cousins also survive. He was preceded in death by his parents, and his brother Leonard Vizina. A Mass of Christian burial was celebrated at 11 a.m., Wednesday, February 12, 2014 at St. Ann’s Catholic Church, Baraga with Father Corey Litzner, celebrant. The family greeted friends at the Reid Funeral Service and Chapel, L’Anse on Tuesday, February 11, 2014 from 5 until 8 p.m. Baraga County area veterans, under the direction of the Baraga American Legion Post #444 conducted military honors at the funeral chapel on Tuesday at 6 p.m., a Knights of Columbus service followed and a parish prayer service was held at 7 p.m. Spring interment will take place in the Baraga Cemetery.

DONALD F. VIZINA, age 72, of Baraga, MI passed away Thursday, February 6, 2014, at Baraga County Memorial Hospital following a lengthy illness. He was born on the family farm in Baraga, MI on August 14, 1941, the son of the late Lawrence and... View Obituary & Service Information

The family of DONALD F. VIZINA created this Life Tributes page to make it easy to share your memories.

Send flowers to the VIZINA family.