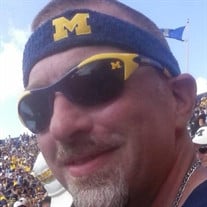 Daniel A.” Dan” Smith, age 45 of L’Anse, MI passed away Monday, January 4, 2021 in L’Anse. He was born in Jackson, MI on October 23, 1975 the son of William “Bill” and Charmayne (Corser) Smith. Dan graduated from L’Anse High School in 1994. He had been employed at Peninsula Powder Coating as a laborer. Dan was a member of United Lutheran Church, L’Anse. He enjoyed gaming, camping, history, music and football. He was an avid Detroit Lions, Redwings, Pistons and Michigan fan. Dan is survived by his loving children Andrea Smith and Justin Dowd both of Clinton Twp., MI, Aiden, Rowen and Willow Rexford all of L’Anse, his beloved dog Obi Wan, his former wife Renee Coschino of Clinton, Twp., his significant other Betsey Leinonen of L’Anse, his parents Bill and Charmayne of L’Anse, brothers Patrick Smith of L’Anse, Stephen Smith of Kingsford and Earl (Shelia) Lewis of Harper Woods, MI, uncles and aunts, Michael “Bubs” (Robyn) LaPointe, Roy James “Jim” (Christine) LaPointe, Frank (Marti) LaPointe, John (Lori) LaPointe, Pat LaPointe and Deb LaPointe, nephews Shawn, Lucas, River and Remi, nieces Morgan, Elizabeth, Alayla and Raven along with other nieces and nephews. He is also survived by his in-laws Avis and Walter Leinonen and many friends including his best friends Jeff Haataja and Ed Froberg. A celebration of Dan’s life will be held on Saturday, January 9, 2021 at the Zeba Hall, Zeba, MI. Visitation will take place from 1 p.m. until 3 p.m., and funeral services will be held at 3 p.m. with Pastor John Henry officiating. Masks are required and please remember to practice safe social distancing. Dan always gave of himself and even at the end he gave. Dan was a registered donor in order to help others. Dan’s obituary may also be viewed and condolences sent to the family at www.reidfuneralservicechapel.com The Reid Funeral Service and Chapel, L’Anse has been entrusted with the funeral arrangements.

The family of Daniel A. Smith created this Life Tributes page to make it easy to share your memories.