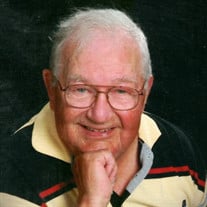 Darrell L. Giddings, age 91, of L’Anse, MI passed away at his home on Sunday, April 28, 2019 with his loving family by his side. He was born in L’Anse, MI on February 27, 1928 the son of the late Norbert and Irma (Streeter) Giddings. Darrell graduated from Baraga High School in 1945. He joined the U.S. Navy in 1946 and proudly served his country until 1948. Darrell began working at Pettibone Corp, Baraga, MI in 1960 and was a parts manager there for over 30 years. He married the former Jean Soli and she preceded him in death in 1981. In 1982 he married the former Ellen Herrala and she preceded him in death in 2007. Darrell was a member of United Lutheran Church, L’Anse and the L’Anse Masons. He was an avid Green Bay Packer and Brewers fan, was a “big time Michigan Tech groupie”, had enjoyed playing cards, hunting, fishing, camping, traveling, gardening and was a long time well know basketball official. He was the 1st official from the Upper Peninsula to officiate a state final. Mr. Giddings is survived by his loving children, Michael (Lisa) Giddings of Baraga, Steve Giddings of L’Anse, Carol (Mike) Roth of Keweenaw Bay and Ken Giddings of L’Anse, daughter-in-law Denise Giddings of Baraga, step daughters Carol (Gerry) Deschaine and Michelle (Stuart) Francois, grandchildren Jamie, Kristie, Michelle, Krystal, Bryan, Jessica, Jared, Daniel, Ryan and Ashley, great grandchildren Kade, Kason, Bentleigh, Ava, Makenna, Jake, Hailey, Damon, Kyle, Logan, Keegan, Tara, Tyler, Jack, Kaden and Carter, sister Carol (Lloyd) Seavoy of Skanee and numerous nieces, nephews and cousins. He was preceded in death by his parents, his sister Mary Lou, brother Norman, his 1st wife Jean and wife Ellen, son Jack, granddaughter Holly and grandson Trevor. Memorial funeral services for Mr. Giddings will be held at 3 p.m. Thursday, May 2, 2019 at the Reid Funeral Service and Chapel, L’Anse with Pastor John Ansell officiating. The family will greet friends at the funeral chapel on Thursday from 1 p.m. until the time of the memorial service. Baraga County area veterans, under the direction of the Baraga American Legion Post #444 will conduct military honors at the funeral home on Thursday at 2:30 p.m. Immediately following the memorial funeral service, the family invites friends to join them for fellowship and a luncheon at the Baraga American Legion Post #444. Mr. Giddings obituary may also be viewed and condolences sent to the family at www.reidfuneralservicechapel.com. The Reid Funeral Service and Chapel, L’Anse, MI has been entrusted with the funeral arrangements.

The family of Darrell L. Giddings created this Life Tributes page to make it easy to share your memories.

Send flowers to the Giddings family.