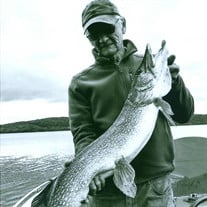 David Waino Besonen, age 70, of Covington went to his great eternal peace the morning of Sunday, Feb. 28, 2021. David loved his wife, Joanne, and his family: sisters, brother, in-laws, nieces, nephews, grand nieces and grand nephews. They brought him great joy. David worked his John Deere tractor like Joanne played her flute. Neither could imagine trading places. He loved helping others, and spent roughly 40 years in emergency medical services and the fire department. David and Joanne worked and played together, traveling, gardening, picking berries, hiking with their cat, Oliver, moving snow from one place to the other and feeding deer and turkeys. They used to downhill and cross-country ski and snowshoe, and felt safe and happy together. David's good friends and ambulance co-workers Carol Holma and Marvin Rajala rushed to his side when he collapsed in his kitchen. During the one day he spent in the hospital, his sister, Joan Haigh, offered comfort in a note about times shared with Joanne and David, and a life well spent: "I remember picnic meals in the backyard at the farm and at the lake, snowshoeing on crisp winter days across your land to the top of the ridge, fall days picking apples, being warm and tired after a day of work, and then a sauna, relaxing and talking. "You took trips out to Colorado to visit us, and we sledded and skied, had hikes in the ruins of Mesa Verde and dinners in downtown Durango. Adam's (Joan's son) first road trip was to attend your wedding, when he was just a baby. As young kids, there was no better fun for them than riding in the trailer behind David's 4-wheeler in Covington. "Times of passages and transitions are times for us to take stock and be thankful for the moments we have had, and enjoyed. My heart is breaking with sadness, but is also full of thanks for the fact that we knew David and had him in our lives, both near and far, depending on the years. "He was our big brother, protector and defender. He disciplined us, kept us on task, played with us and teased us. David was quiet at times and always more complex than he appeared. Sending love and strength. Letting go is hard for everyone. Peace be with us all." David was born July 5, 1950 in Stambaugh. He attended L'Anse Area Schools, graduating in 1969. He served as a medic in the U.S. Army from 1970 to 1972, and following his service, was hired by CCI where he worked as an electrician, retiring in 2002. David was a member of Trinity Lutheran Church, the Covington Historical Society and AMVETS Post 1140 in Covington. David is survived by his wife, Joanne; sisters Janet (Phil) Neitzel of Big Rapids; Joan (Tony) Haigh of Danville, KY; Gail (Dave) Meinert of Springfield, MO and Pamela of Covington; brother Donald (Nancy) of Watton; sisters-in-law Helen (Ray) Stoop of Corvallis, OR, Jane (Jeff) Svinicki of Juneau, AK and Joyce Iwinski of FL and Big Bay; mother-in-law Edna Johnson of Marquette, nieces, nephews, grand nieces and nephews and friend, Judy Rosemergy. He was preceded in death by his parents, Alice and Waino Besonen of Covington, MI, father-in- law John Johnson, brother-in-law Steve Iwinski, nephew Greg Neitzel and niece Nicole Neitzel. Military services, fire department services and EMS services will be conducted Saturday, June 5, 2021 at 10 a.m. in the Covington Cemetery followed by graveside services at 10:30 a.m. with Vicar Corey Harman officiating. Thank you to all who sent kind thoughts, memories and prayers. -Joanne- David’s obituary may also be viewed and condolences sent to the family at www.reidfuneralservicechapel.com The Reid Funeral Service and Chapel, L’Anse has been entrusted with the arrangements.

The family of David W. Besonen created this Life Tributes page to make it easy to share your memories.

Send flowers to the Besonen family.