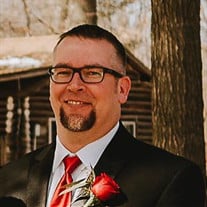 Derek John Klobucher, age 36, of Princeton, Minnesota passed away Sunday, May 27, 2018. He was born in L’Anse, MI on October 15, 1981 the son of Emil J. “John” and Karen (Michaels) Klobucher. Derek graduated from Baraga High School in 2000. He served his country in the United States Army deploying to Iraq in the 1st Calvary Division, 91st Engineer Battalion, Bravo Company. Derek was a Specialist E-4. A decorated veteran awarded the Purple Heart during his time of service. Following his service he found work in the trade fields with his longest being at ATK Commercial Ammunition Co, Inc - Federal in Anoka, MN. He loved his country, his companion Oppie, his family, the Detroit Tigers and the game of hockey. Derek enjoyed the outdoors and spending time in the Upper Peninsula hunting with his father. Derek was an avid snowmobiler and ice fisherman but his passion lied in restoring his older model Chevelle. He will always be remembered for his heart of gold and unforgettable smile. Derek is survived by his loving family; parents John and Karen Klobucher of Baraga, sister Tracy (Mark) Tembreull of Vermont, brother Joe (Chelsea) Klobucher of L’Anse, nieces Audrey Tembreull and Silvana Klobucher, nephews Eyon, Oliver and Eliot Tembreull and Deslin Klobucher as well as his dog, Oppie-companion and best bud. He is also survived by numerous aunts, uncles, cousins and dear friends. He was proceeded in death by his grandparents, some aunts and uncles from both sides of his family. “The Lord will keep your going out and your coming in from this time on and forevermore” Psalm 121:8 A memorial funeral service will be held at 12:30 pm, Monday June 11, 2018 at the Reid Funeral Service and Chapel with Pastor John Ansell officiating. The family will greet friends at the funeral chapel on Monday from 10:00 am until the time of service. Baraga County Area Veterans, under the direction of the Baraga American Legion Post #444 will conduct Military Honors in the funeral chapel at 12:00 p.m. Immediately following the memorial service, friends are invited to join the family in sharing memories and a potluck luncheon at the Baraga American Legion Post #444, Baraga. Inquiries concerning the luncheon may be addressed to Carol McCutcheon at (906) 235-0049. Interment will take place at the Baraga Cemetery. The Reid Funeral Service and Chapel in L’Anse has been entrusted with the funeral arrangements.

The family of Derek John Klobucher created this Life Tributes page to make it easy to share your memories.

Send flowers to the Klobucher family.