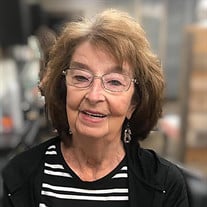 Dianne E. Taylor, age 81 of L’Anse, MI passed way Saturday, March 12, 2022 at Baraga County Memorial Hospital, L’Anse with her loving family by her side. She was born in L’Anse on March 8, 1941 the daughter of the late Undo and Eleanor (Ranta) Johnson. Dianne graduated from L’Anse High School in 1959. She married James Lloyd in L’Anse on October 17, 1959. He preceded her in death in 1983. Dianne had been employed as a postal carrier in the L’Anse area and as a bank teller with various banks in Florida. She was a member of United Lutheran Church, L’Anse and a member of the former L’Anse Eagles Club #2287. Dianne enjoyed gardening, flowers, feeding the birds, knitting, crocheting, watching games shows, and was an avid sports fan including watching the Pistons, Tigers and Red Wings. Dianne had been very involved in her children’s and grandchildren’s activities. She will be remembered for her “sisu” towards her health issues and was thankful to Sandy Menge’s longtime friendship to her. Dianne is survived by her loving children Debbie Knox (Dave Holmberg) of Iron Mountain, Scott (Tammie) Lloyd of L’Anse, and Steve Lloyd of L’Anse, grandchildren Ryan (Kara) Knox of Bellinham, Washington, Carissa (James) Beaubian of Milwaukee, Wisconsin, Tyler (Libby) Lloyd of Lexington, Kentucky, Travis (Kelly) Lloyd of Denver, Colorado, Hollie (Aaron) Loosemore of L’Anse, Courtney (Jared) Spencer of L’Anse, Logan Lloyd of L’Anse and Sam (Tyler) Larson of Skanee, great grandchildren Wyatt and Connor Knox, Addison Beaubian, Mason, Findlay, Jasper, and Piper Lloyd, Hadley, Holden, and Hutson Loosemore, Sterling and Scarlett Spencer, and Halle and Hannah Larson, her brother Roger (Nancy) Johnson of Florida, niece Amy (Greg) Awe of Florida and nephew Jay (Anjillia) Johnson of Michigan. She is also survived by her close friends Charlene, Betty, Ellen, Barb, Judy, Lavone and Linda. Dianne was preceded in death by her parents, her husband James, her grandson Sean Knox, her significant other Jack Williamson in 2021 and close friends Sharon and Joyce. A memorial funeral service will be held at 11:30 a.m. on Friday, May 6, 2022 at the Reid Funeral Service and Chapel, L'Anse with Pastor John Ansell officiating. The family will greet friends at the funeral home on Friday from 10:30 a.m. until the time of the memorial service. Interment will then take place in the L'Anse Evergreen Cemetery. Immediately following the interment, family invites friends to join theme for fellowship and a luncheon in the Harrington Gathering Room, located at the funeral home. Dianne’s obituary may also be viewed and condolences sent to the family at www.reidfuneralservicechapel.com The Reid Funeral Service and Chapel, L’Anse has been entrusted with the funeral arrangements.

The family of Dianne E. Taylor created this Life Tributes page to make it easy to share your memories.

Send flowers to the Taylor family.