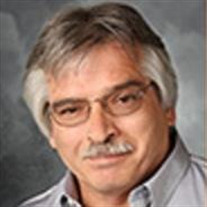 Dominic J. Picciano, age 62, of Baraga, MI passed away at his home on Wednesday, October 17, 2018. He was born in L’Anse, MI on December 15, 1955 the son of the late Dominic and Pearl (Curtis) Picciano. Dominic graduated from Baraga High School in 1974. He married Ann Ross in Baraga on December 31, 1987. Dominic had worked as an electrician and had been the Baraga County Electrical Inspector until his retirement. He was a member of Keweenaw Bay Indian Community, Ojibwa Housing Board, AMERIND Board member, and coached Little League when his kids were young. Dominic enjoyed bowling, and golfing (he had 3 hole in ones at the LÁnse Golf Club). He was an enthusiastic fan of University of Michigan and the Detroit Lions. He loved spending time with his grandchildren, especially their camping trips. Dominic is survived by his loving wife, Ann of Baraga, children Jill DiCarlo of Baraga, Jerry LeClaire of Hot Spring, Arkansas, Brad (Kara) LeClaire of Dickinson, North Dakota, Gina (Sam) Anderson of Texas, Dana (Brian) Shumard of Texas, grandchildren Tony, Kyle, Jeremy, Cannon, Jackson, Vale, Collins and Delena "Dolly", brothers Leroy Picciano of Iron Mountain and Kerry (Robin) Picciano of Baraga, sisters Shirley Stevens of Baraga, Darlene Picciano, Sharon Wise of Monroe, MI, Barbara (Ken) Jones of Ontonagon and Debbie Picciano of Baraga. Numerous nieces, nephews and cousins also survive. He was preceded in death by his parents and his brother Terry. A memorial funeral service for Dominic will be held at 11 a.m. Saturday, October 20, 2018 at the Reid Funeral Service and Chapel, L’Anse with Pastor Keith Snyder officiating. The family will greet friends at the funeral chapel on Saturday from 10 am until the time of the service. Immediately following the memorial funeral service, interment will take place in the Baraga Cemetery and then a luncheon will be held at the Baraga American Legion Post #444. The Reid Funeral Service and Chapel, L’Anse has been entrusted with the memorial funeral arrangements.

Dominic J. Picciano, age 62, of Baraga, MI passed away at his home on Wednesday, October 17, 2018. He was born in L&#8217;Anse, MI on December 15, 1955 the son of the late Dominic and Pearl (Curtis) Picciano. Dominic graduated from Baraga High... View Obituary & Service Information

The family of Dominic J Picciano created this Life Tributes page to make it easy to share your memories.

Send flowers to the Picciano family.