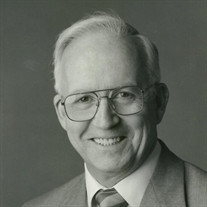 Donald D. Grant, age 90, of Green Bay, WI passed away Monday, November 24, 2020 at Patient Pines Senior Care in Green Bay. He was born in Alston, MI on February 20, 1930 the son of the late James and Violet (Clishe) Grant. Upon graduating from high school Donald began work with the MI Department of Natural Resources as an entrance level clerk in Wakefield, MI. Over time Donald became a fire officer, a District Manager, a State Fire Supervisor, and finally the Chief of Forestry Fire Management for the entire state. Donald, an expert in forest fire control, lectured at Forest Fire Management Seminars, all across the country. His work included prevention of forest fire, fighting fire, and managing prescribed burns of forest lands to promote tree growth and wild life management. While State Supervisor he was honored by his colleagues as the North East Supervisor of the Year. He also was instrumental in developing and enacting a Great Lakes Forest Fire Compact with the states of Wisconsin, Michigan, and Minnesota as well as the Provinces of Ontario and Manitoba. Although retired for many years he kept in touch with a number of friends who worked with him in the MI DNR. Donald had many interests and hobbies. He belonged to a Rose Growing Club and exhibited many of his roses often winning first place ribbons and trophies. He loved playing cards and was an accomplished Bridge and Cribbage player. Donald was also a prolific reader and liked to travel. He visited most of the United States and parts of Canada and Mexico. He lived in Green Bay, Wisconsin in his later years and spent many winters in Brownsville, Texas with a group of close friends. Donald was preceded in death by his brothers, James Grant, Gilbert Grant, Robert Grant, and his sister Jean Pratt. He is survived by friends and family including many loving nephews and nieces. He also leaves behind a caring and loving staff from his home of the past year and a half at Patient Pines Senior Care, Green Bay, Wisconsin. A graveside funeral service and interment will take place in the Baraga Cemetery on Tuesday, December 1, 2020 at 1 p.m. Donald’s obituary may also be viewed and condolences sent to the family at www.reidfuneralservicechapel.com The Reid Funeral Service and Chapel, L’Anse has been entrusted with the funeral arrangements.

Donald D. Grant, age 90, of Green Bay, WI passed away Monday, November 24, 2020 at Patient Pines Senior Care in Green Bay. He was born in Alston, MI on February 20, 1930 the son of the late James and Violet (Clishe) Grant. Upon graduating from... View Obituary & Service Information

The family of Donald D. Grant created this Life Tributes page to make it easy to share your memories.

Send flowers to the Grant family.