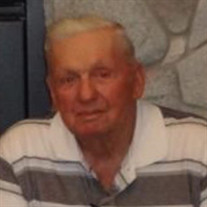 Donald C. ”Don” Johnson, age 86, of L’Anse, Michigan passed away Friday, June 7, 2019 at Bayside Village, L’Anse with his loving family by his side. He was born in L’Anse on May 17, 1933 the son of the late Thure and Mary (Destrampe) Johnson. Don attended school in L’Anse. He joined the United States Army and honorably served during the Korean War. Don married the former Donna Whaley in L’Anse on February 14, 1953. She preceded him in death on August 27, 2011. Don owned and operated D&H welding in L’Anse from 1965 until his retirement. He was a member of Sacred Heart Catholic Church, L’Anse, the L’Anse Fire Department, L’Anse VFW Post #3897, the L’Anse American Legion Post #144 and the L’Anse Golf Club. Don was instrumental in the building of the L’Anse Golf Club and the L’Anse American Legion. He enjoyed hunting, fishing, golfing, traveling, and had spent many winters in Florida. He and Donna loved to entertain and always opened their home to family and friends. He was an avid Lions, Tigers and Red Wings fan. Don is survived by his loving children, Donald (Teresa) Johnson of L’Anse, Barbara “JoJo’ (Jerry) Marinich of L’Anse and Cheryl “Sissy” Marinich of L’Anse, grandchildren Jerry (Heidi) Marinich of L’Anse, Dawn Marinich (Jason Kemppainen) of L’Anse, Brooke (Jim) LaFernier of L’Anse, Brandon Marinich (April Thor) of L’Anse, Jessica (Chad) Tollefson of L’Anse and Charlie Johnson (Abbey Younggren) of Skanee, great grandchildren Breanna, Reeyce, Rylee, Khloe, Darylynn, Braelyn, Kyla, Tessa, Tannon, Tenley and Harper and brothers Henry Johnson of Skanee and Len (Sue) Williams of Sandusky, Ohio. Numerous nieces, nephews and cousins also survive. He was preceded in death by his parents, wife and sisters Shirley, Marilyn and Laverne. Funeral services for Don will be held at 1 p.m. Wednesday, June 12, 2019 at the Reid Funeral Service and Chapel, L’Anse with Father Corey Litzner officiating. The family will greet friends at the funeral chapel on Wednesday from 11 am until the time of the funeral service. The L’Anse Fire Department will conduct a service at 12:15 pm and Baraga County Area Veterans, under the direction of the Baraga American Legion Post #444 will conduct military honors at 12:30 pm. Immediately following the funeral service, interment will take place in the L'Anse Evergreen Cemetery. The family invites friends to join them for fellowship and a luncheon in the Harrington Gathering Room, located at the funeral home following the interment. Don’s obituary may also be viewed and condolences sent tot the family at www.reidfuneralservicechapel.com. The Reid Funeral Service and Chapel, L’Anse has been entrusted with the funeral arrangements.

The family of Donald C "Don" Johnson created this Life Tributes page to make it easy to share your memories.

Send flowers to the Johnson family.