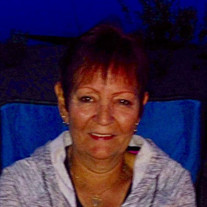 Doreen N. Smith, age 63, of Baraga, passed away on July 14, 2016 at her home surrounded by her loving family. She was born in Pontiac, Michigan on August 1, 1952 the daughter of the late Richard and Elizabeth (Miller) Galer. Doreen was raised in Madison Heights and attended local schools. On September 13, 1969 she married Irvin J. Smith and they moved to Baraga in the early 1990’s. He preceded her in death on April 24, 2015. Doreen was a member of the Keweenaw Bay Indian Community. She had held various jobs in the area and had enjoyed working at the Ojibwa Senior Citizens Center as a cook. Doreen liked to sew, including making the regalia for her grandchildren for the Pow-Wow. She was a Tigers fan, enjoyed attending the Pow-Wow, going to bingo, baking, cooking and fishing. Doreen is survived by her loving children, Edith (Dennis) Hansinger of Clawson, MI, Christy (Kevin) Krawczyk of Livonia, MI, Dwayne (Pamela) Smith of Baraga, Richard (Connie) Smith of Iron River, MI, Irvin (Gina) Smith of Baraga, Serene Smith of Baraga and Jacob Smith of Baraga, 14 grandchildren, brothers Foster Galer of Baraga and Robert Galer of L’Anse, sisters Gloria Galer of Ontonagon, Margaret (Pete) MacDonald of Sun City West, AZ and Diane (James) Czech of Harper Woods, MI. Numerous nieces, nephews and cousins also survive. She was preceded in death by her parents, her husband, sister Rosemary Lamberger and nephews Darren Morgan and Ronny Drinkard. A memorial service was held at 11 a.m. on Monday, July 18, 2016 at the KBIC Zeba Hall with Deacon John Cadeau officiating. The family greeted friends at the hall on Monday from 10 a.m., until the time of the service. Immediately following the memorial service, interment took place in the L’Anse Evergreen Cemetery. A luncheon was held at the KBIC Zeba Hall following interment. Doreen’s favorite quote, “Love you to the moon and back.”

Doreen N. Smith, age 63, of Baraga, passed away on July 14, 2016 at her home surrounded by her loving family. She was born in Pontiac, Michigan on August 1, 1952 the daughter of the late Richard and Elizabeth (Miller) Galer. Doreen was raised... View Obituary & Service Information

The family of Doreen N Smith created this Life Tributes page to make it easy to share your memories.