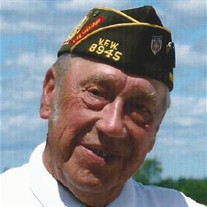 Douglas H. “Doug” Syrjala, age 86, of L’Anse, passed away Friday, October 13, 2017 at Bayside Village, L’Anse. He was born in Watton, Michigan on February 20, 1931, the son of the late Martha Syrjala. Doug graduated from L’Anse High School. He proudly served in the United States Air Force during the Korean Conflict. Doug worked at various companies in the mining industry as a miner/surveyor. He married the former Dorothy E. Kantola in L’Anse on April 20, 1974. She preceded him in death on September 27, 2006. Doug was an active member and past Commander of Covington VFW Post #8945 and had helped design the veteran monument in Covington. He was a political activist, enjoyed hunting, fishing and had loved being with his dogs. Doug was an accomplished artist and musician, and played the mandolin and guitar. Doug is survived by his daughter Jackie (John) McKeating of New York, son-in-law John Beckman of Canton, MI, grandchildren Sarah Beckman of New Jersey, Robert (Angela) Beckman of Northville, MI, Nik (Jamie) Rongers of Jacksonville, FL. and Jordan Rongers of Washington, DC, great grandchildren Claire Ann Beckman, James Thomas Beckman and Harrison Jerzy Rongers, brothers Dennis Leaf of WI and Dale Leaf of Covington. He was preceded in death by his wife Dorothy, and his daughter Dorothy. Funeral services for Doug were held at 11 a.m. Friday, October 20, 2017 at the Reid Funeral Service and Chapel, L’Anse with Pastor Mark Reinsch officiating. The family greeted friends at the funeral chapel on Thursday, October 19, 2017 from 6 p.m. until 8 p.m. and on Friday from 10 a.m. until the time of the service. Immediately following the funeral service, interment and military honors, under the direction of the Baraga American Legion Post #444 were conducted in the Covington Cemetery. Friends were then invited to join the family for fellowship and light refreshments at the Covington VFW Post #8945.

The family of Douglas H. "Doug" Syrjala created this Life Tributes page to make it easy to share your memories.

Send flowers to the Syrjala family.