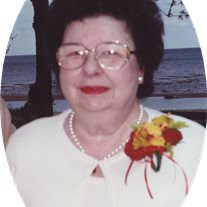 ELSIE I. FISHER, 88, of L’Anse, MI. passed away Friday, November 12, 2010 at Christian Park Village Nursing Home, Escanaba, MI. following a short illness. She was born in Engadine, MI. on October 7, 1922 the youngest daughter of the late Ferd and Avis (Pixley) Boucha. Elsie attended Engadine High School. She married Hugh J. Fisher, the love of her life, on September 18, 1940. He preceded her in death on October 11, 2005. Elise was a member of United Methodist Church, L’Anse, a former member of the L’Anse Golf Club, and the VFW Auxiliary #8372. She loved the outdoors, and was an excellent cook and baker. Elsie was a devoted mother and was extremely proud of the accomplishments of her grandchildren. Each one was very special to her. Mrs. Fisher is survived by her loving children John (Irene) Fisher of Escanaba, Harland (Virginia) Fisher of Ft. Myers, FL., and Charles (Colleen) Fisher of Germany, grandchildren Tonya, Rhett, Tyler, Kaylin, Linnea, Nathan, Michele, and Joe, great grandchildren Matthew, Holden, Jillian, Megan, Dylan, Ethan, Michael, Devan, Brandan, Steven, and Kayla. She is also survived by nieces, nephews and other family members. Mrs. Fisher was preceded in death by her brothers Clarence, Lloyd, and Alfred and sisters Erma, Emma, and Rita. Funeral services for Mrs. Fisher were held at 12 pm, Thursday, November 18, 2010 at the Reid Funeral Service and Chapel, L’Anse with Pastor John Henry officiating. Interment took place in the L’Anse Evergreen Cemetery. The family received friends at the funeral chapel on Thursday from 10:30 am until the time of the service. Following the service, the family invited friends to join them for fellowship and a luncheon in the Harrington Gathering Room, located at the funeral chapel.

ELSIE I. FISHER, 88, of L&#8217;Anse, MI. passed away Friday, November 12, 2010 at Christian Park Village Nursing Home, Escanaba, MI. following a short illness. She was born in Engadine, MI. on October 7, 1922 the youngest daughter of the late... View Obituary & Service Information

The family of ELSIE I. FISHER created this Life Tributes page to make it easy to share your memories.

Send flowers to the I. FISHER family.