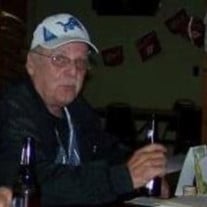 Edward W. "Bill" Johnson, Jr., age 74 of Kenton, MI passed away Saturday, May 7, 2022 at Baraga County Memorial Hospital, L'Anse, MI. He was born in Stambaugh, MI on November 30, 1947 the son of the late Edward W. and Irene (Leinonen) Johnson, Sr. Bill graduated from Ewen High School in 1965. He joined the United States Air Force, and proudly served his country during the Vietnam War. Following his honorable discharge, he was employed at White Pine Mine until its closure. Bill attended Michigan Tech University for welding training. He then began his employment at Houghton County Road Commission and retired in 2010. Bill married the former Beverly “Bev” Bonin in Trout Creek on December 23, 1971. He was a member of Teamsters Local Union #214, Trout Creek American Legion Post #494, and the Covington VFW Post #8945. He was an avid Lions fan, and enjoyed watching jeopardy, camping and 4-wheeling. Bill is survived by his loving wife Bev of Kenton, son Erik “Guck” (Tara) Johnson of Bruce Crossing, and daughter Skye (David) Johnson of Kenton, grandchildren RaeAnn and Tia Johnson and Austyn Johnson, great grandson Tracyn Johnson, sisters Frankie Perttula of Florida and Janice (Jerry) Frailling of South Dakota. Many nieces, nephews and cousins also survive. He was preceded in death by his parents, brothers Bobby, Artie and Johnny Johnson, sister Shirley Hansen, and several other family members. Graveside services and military honors will be held at 11 a.m. on Saturday, June 11, 2022 in the Kenton Cemetery, Kenton, MI. Immediately flowing the internment, the family invites friends to join them for fellowship and a luncheon at the Trout Creek American Legion Post #494 in Trout Creek, MI. Bill's obituary may also be viewed and condolences sent to the family at www.reidfuneralservicechapel.com The Reid Funeral Service and Chapel, L’Anse has been entrusted with the funeral arrangements.

The family of Edward W. "Bill" Johnson created this Life Tributes page to make it easy to share your memories.