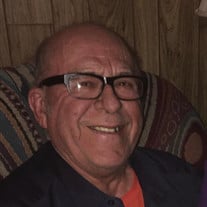 Ethan James “Jim” Newland, Jr. age 82 of L’Anse, MI passed away Friday, November 5, 2021 at UP Health System, Marquette, MI with his family by his side. He was born in L’Anse, MI on May 22, 1939 the son of the late Ethan James, Sr. and Aurora Elizabeth (Marion) Newland. Jim graduated from L’Anse High School in 1958. He married the former Sharon Schwerman in Mundelein, IL on February 20, 1960. Their courtship started with a six pack and a pizza in the middle of a corn field and lasted over 60 years. Jim had worked for various roofing companies and had owned and operated his own roofing company, Local Roofing for 50 years. He retired in the early 2000’s. Jim was raised Seventh-Day Adventist. He enjoyed hunting, especially bear hunting, fishing, going to camp with his friends, gardening, storytelling, racing, and water skiing with all his kids. He never let the grass grow under his feet and he never forgot about his friends. He always talked about his book that he wanted to write, “The Times I Got Away and The Times I Had to Pay”. Jim was a hardworking man and proudly taught his children great work ethics. Jim is survived by his loving wife Sharon, children James (Missy) Newland of L’Anse, Patrick (Kristin) Newland of Vero Beach, FL, Jerry Newland of L’Anse, Richard Newland of Vero Beach, FL, Shirley Mleko of Baraga and Shelley (Lyndon) Ekdahl of L’Anse, 18 grandchildren, 8 great grandchildren, brother Daniel Newland of Skandia, MI, sisters Janet Kiefel of Aurora, IL, Joan Perez of Wichita, KS and Connie Manning of L’Anse. Numerous nieces, nephews and cousins also survive. He was preceded in death by his parents, son-in-law Shawn Mleko, daughters-in-law Catherine Newland and Jennifer Newland, sister Bonnie Henry, sister and brother-in-law Betty (Ray) Supanich, brothers-in-law Pedro Perez and Walter Kiefel, sister-in-law Gail Schwerman and his in-laws Robert and Florence Schwerman. Funeral services for Jim will be held at 1 p.m. Wednesday, November 10, 2021 at the Reid Funeral Service and Chapel, L’Anse with his nephew Pastor Pedro Perez officiating. The family will greet friends at the funeral home on Wednesday from 11 a.m. until the time of the funeral service. Immediately following the funeral service, the family invites friends to join them for fellowship and a potluck luncheon in the Harrington Gathering room, located at the funeral home. Jim's funeral service with be live streamed at Reid Funeral Service and Chapel's Facebook page at the following link https://www.facebook.com/events/872884250083368?ref=newsfeed Jim’s obituary may also be viewed and condolences sent to the family at www.reidfuneralservicechapel.com The Reid Funeral Service and Chapel has been entrusted with the funeral arrangements.

The family of Ethan James "Jim" Newland Jr. created this Life Tributes page to make it easy to share your memories.

Send flowers to the Newland family.