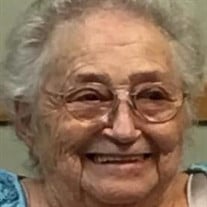 Evelyn L. Beauprey, age 95, of L’Anse, MI and formerly of Sidnaw, MI passed away Saturday, January 20, 2018 at Bayside Village, L’Anse. She was born in Crosby, MN on August 26, 1922, the daughter of the late Henry and Ida (Demster) Provost. Evelyn attended school in Kenton, MI. She married Joseph Beauprey in Negaunee, MI on September 12, 1945. He preceded her in death on February 24, 2005. Evelyn was a member of the former Sidnaw Catholic Church. She enjoyed visiting with family, baking and had loved to travel with her husband and had gone twice to Hawaii. During her stay at Bayside, Evelyn enjoyed playing bingo and cards with her roommate and good friend, Aileen Davis. Mrs. Beauprey is survived by her loving son, Joseph Beauprey (Lynn Forest) of L’Anse, grandchildren Bob Beauprey of L’Anse, Jerita LaPlante of Covington, MI and Tony (Kristy) Beauprey of Sidnaw, 10 great grandchildren, 3 great-great grandchildren and her brother Joseph (Kathy) Provost of Crystal Falls, MI. Several nieces and nephews also survive. She was preceded in death by her parents, her husband Joseph, brothers Edward and Milton Provost, sister Elizabeth (Provost) Norback and her favorite niece Darlene (Norback) Morin. Funeral services for Mrs. Beauprey will be held at 10:30 a.m. Saturday, January 27, 2018 at the Reid Funeral Service and Chapel, L’Anse with Father Corey Litzner officiating. The family will greet friends at the funeral chapel on Saturday from 9:30 a.m. until the time of the funeral service. Immediately following the funeral service, the family invites friends to join them for fellowship and a luncheon in the Harrington Gathering Room, located at the funeral chapel. Spring interment will take place in the Sidnaw Cemetery. The Reid Funeral Service and Chapel, L’Anse, MI has been entrusted with the funeral arrangements.

The family of Evelyn L. Beauprey created this Life Tributes page to make it easy to share your memories.

Send flowers to the Beauprey family.