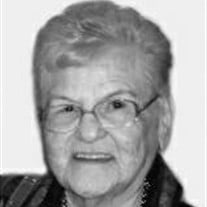 BANGII OGICHIDAA IKWE (Tiny Warrior Woman) Florence Genevieve Uusitalo, 88, of L’Anse went home to be with her Lord Jesus Christ, on Saturday, March 24, 2012, at Marquette General Hospital, Marquette, following a short illness. She was born in Assinins, Michigan on December 21, 1923, daughter of the late Thomas and Mary Jane (Mongus) Shalifoe. Florence attended school in Baraga. She married Raymond Kemppainen in 1943 and he preceded her in death in November 1960. Florence then married Carl Uusitalo in L’Anse on April 23, 1962. He preceded her in death in June 1992. She worked as a housekeeper in Marquette, managed the Midway Restaurant in Baraga, was a Community Health Representative to the Keweenaw Bay Indian Community until her retirement in 1985, and worked at and was dedicated to the Baraga County Women’s Shelter Home from 1998 to 2008, retiring at the age of 85. Florence was a member of Holy Name of Jesus Church in Assinins and was very dedicated to her faith. She was a member of the Keweenaw Bay Indian Community and Ojibwe Seniors. She was an elected Tribal Council member and sat on several committees. Florence was also a member of the Michigan Indian Elders Association. Florence was devoted to her family and grandchildren, and as NOOKOMIS (grandmother) she was present at many of their births and family events and very involved in their lives. She loved her nieces and nephews and was a wonderful auntie and was loved dearly by them. Florence made time for everyone who needed her. Mrs. Uusitalo spent countless hours at the Ojibwe Senior Center sewing, quilting, and teaching her friends and family the same. She enjoyed reading, traveling, baking, cooking, shopping, and visiting her family, friends, and relatives. You could run into Florence at the Ojibwe Casino on occasion. Mrs. Uusitalo is survived by her sons Thomas (Cheryl) Kemppainen of Columbia Falls, Montana; David (Monica) Kemppainen of Sparks, Nevada; Peter (Sue) Kemppainen of White Pine, Michigan; and daughters Jennifer (William) Wilson of Petoskey, Michigan; Susan (Terrence) Ludwig of Suring, Wisconsin; Anna Uusitalo-(Patrick) Meissner; and Janet Uusitalo-(Michael) Franti of L’Anse, Michigan, 23 grandchildren; 28 great grandchildren; 1 great great grandchild and several nieces, nephews, and cousins. Florence was preceded in death by her first husband, Raymond Brunolph Kemppainen; and husband Carl John Uusitalo; son John Carl Uusitalo; a daughter Carol Marie Barriger; brothers Thomas Shalifoe, Charles Shalifoe, Frederick Shalifoe, Richard Shalifoe; and sisters Cecelia LaPointe, Marcella Loonsfoot, Sarah Froberg, and Isabelle Chosa. A Mass of Christian burial was celebrated at 4 p.m. on Tuesday, March 27, 2012 from the Holy Name of Jesus Church in Assinins with Father Antony, celebrant. Following the Mass, a visitation was held in the Ceremonial Room at the Ojibwe Senior Citizens Center, Baraga starting at 6 p.m. Tuesday evening. A funeral service was held at 10 a.m. in the Ceremonial Room Wednesday, March 28, 2012 with Reverend Scott Leutz officiating. Interment took place in the Assinins Cemetery. A feast was held following interment at Ojibwe Senior Citizens Center.

The family of FLORENCE G. (BANGII OGICHIDAA IKWE) UUSITALO created this Life Tributes page to make it easy to share your memories.