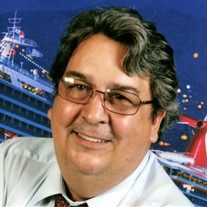 Francis C. Darcy, age 64, of Baraga, MI passed away unexpectedly at his home on Thursday, March 15, 2018. He was born in Hancock, MI on July 10, 1953 the son of the late Ellsworth “Sonny” and Eleanor “Stubby” (Rabideaux) Darcy. Francis was a Baraga High School graduate. He proudly severed in the US Navy. Francis married the former Shirley Hinkson in Bellefortain, Ohio on March 11, 1993. He retired from the auto industry where he had been employed as a fork lift operator. Francis was a member of the Keweenaw Bay Indian Community, the Ojibwa Senior Citizens, Baraga American Legion Post 444 and had been an original member of the Drum and Bugle Corp. His greatest passion was music and had played drums, guitar and the piano. He enjoyed traveling, including going to his niece’s buffalo ranch, going on side-by-side rides, partying and taxiing around anyone who needed a ride. He had driven the van for Michigan Indian Elders Association for many years and will be remember as the “Baraga County Clumsy Clown.” Francis is survived by his wife Shirley of Ohio, son Jared Darcy of North Dakota, daughters Stacy Colgin of Ontonagon and Kassandra Tousignant of East Lansing, step-children Billy Jack Samuelson, Tom Neeley, Bobbie Jo Anderson and Roseann Neeley, grandchildren Henry, Connor, Nathan and Marissa,brother Thomas (Val) Darcy of Baraga, sisters Barbara Swartz of Baraga, Sandi (Boone) Pittsley of Baraga and Anne (Jim) Miller of Pelkie. Numerous nieces, nephews and cousins also survive. He was preceded in death by his parents, his sister Vicki, his brother Larry, his brother-in-law Clyde and two step children Scott Neeley and Jeff Neeley Funeral services for Francis were held at 1 p.m. Monday, March 19, 2018 at the Reid Funeral Service and Chapel, L’Anse with Deacon John Cadeau officiating. The family greeted friends at the funeral chapel on Monday from 11 a.m until the time of the funeral service. Military honors, under the direction of the Baraga American legion Post 444 were conducted at the funeral chapel on Monday at 12:30 pm. Immediately following the funeral service, the family invited friends to join them for fellowship and a luncheon at the Ojibwa Senior Citizens Center, Baraga, MI. Graveside services and interment will be held at 10:00 am (before the opening of the KBIC Pow-Wow) on Sunday, July 29, 2018 in the Baraga Cemetery, Baraga, MI. The Reid Funeral Service and Chapel, L’Anse has been entrusted with the arrangements.

The family of Francis Charles Darcy created this Life Tributes page to make it easy to share your memories.

Send flowers to the Darcy family.