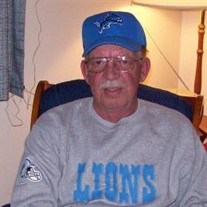 Francis D. Kanniainen, age 74, of Houghton, Michigan passed away Monday, September 10, 2018 at his home surrounded by his loving family. He was born in Covington, MI on October 9, 1943 the son of the late Louie and Ruth (Niemi) Kanniainen. Francis graduated from L’Anse High School in 1961. He joined the United States Air Force and honorably served during the Vietnam War. Francis had worked at Baraga County Road Commission as an Engineer Aide until his retirement. He was a member of Bethany Lutheran Church, Covington, the Covington AMVETS and Covington Fire Department. Francis had also served on the Covington Township Board for 12 years. He loved going out to his camp in Sidnaw that he had built in 1985, watching the Lions and Tigers and going to the casino. He and Linda had traveled many times to Laughlin, Nevada. Francis was always available to help his neighbors with anything they needed. He was the courier for getting messages or items from one of his daughters to the other. Francis is survived by his loving family, daughters Lisa (George) Karcher of Covington, Anne (John) Tikkanen of Baraga and Lynn LaTendresse (Michael Shiroda) of Chassell, grandchildren Stephen (Megan) LaBerge of Eagan, Minnesota, Shelby Sikkila (Tyler Fredricks) of Remus, MI and Jordan LaTendresse of Bozeman, Montana, step grandchildren Ashley (Jake) Karcher-Nabasny of Buffalo, NY and Alex Karcher of Buffalo, NY, step great granddaughter Sloane Nabasny of Buffalo, NY, his significant other Linda Holma of Houghton, MI, brothers Gene (Sandy) Kanniainen of Taylorsville, CA, Louie Kanniainen of L’Anse and special friend Doug Holma of Watton, MI. Numerous nieces, nephews and cousins also survive. He was preceded in death by his parents, twin brothers Jerome and Jerald, stepmom Bertha Kanniainen and sister-in-law Lorraine Kanniainen. Memorial funeral services for Francis will be held at 1 pm Saturday, September 22, 2018 at the Reid Funeral Service and Chapel, L’Anse, MI with Pastor Rich Little officiating. The family will greet friends at the funeral chapel on Saturday from 11 am until the time of the memorial funeral service. Immediately following the services, the family invites friends to join them for fellowship and a luncheon at the Covington VFW Post # 8945. Interment will take place in the Covington Cemetery. The Reid Funeral Service and Chapel, L’Anse, MI has been entrusted with the funeral arrangements.

Francis D. Kanniainen, age 74, of Houghton, Michigan passed away Monday, September 10, 2018 at his home surrounded by his loving family. He was born in Covington, MI on October 9, 1943 the son of the late Louie and Ruth (Niemi) Kanniainen. Francis... View Obituary & Service Information

The family of Francis D Kanniainen created this Life Tributes page to make it easy to share your memories.

Send flowers to the Kanniainen family.