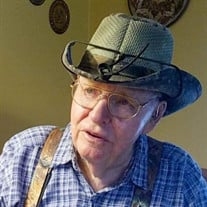 Francis P. Younggren, age 89, of Covington, MI passed away Friday, March 20, 2020 at his son’s home with his family by his side. Francis was born on January 12, 1931, in Ishpeming, MI son of the late Howard Sr. and Mary (Labelle) Younggren. He started his journey on the same farm that he lived on his whole life. A multi-generational home where he made many memories, that he then passed down to his children and grandchildren. Graduating from L’Anse High school in 1950, he then enlisted in the U.S. Air Force, and went through officers training, becoming a fighter pilot during the Korean War times. His love of the UP and Covington brought him home to his beloved family and farm. Francis soon met the love of his life. His late wife Helen Virta in 1956. Together they built a family and life that made them well known throughout the UP and beyond. Their love was that of legends, true soul mates. Francis’s love of animals and farming started at a young age, and never left him. He made hay until the age of 85, and passed on a love of white faced cows and fields to not only his children, but many of his grandchildren, some of them still farm the land he did as a boy. Francis was not only a farmer, but a business owner and logger. Supporting his family with his wife and children by his side. You could find him in a bulldozer opening a road, or in a truck, even into his 80’s. A man with a problem solving and inventing mind. Francis was quick to engineer and invented equipment and machines to accomplish the job at hand. Francis was a hardworking man, only semi-retiring in the last few years of his life. You could still find him sitting at the shop supervising, or in one of his boy’s pickups, riding shot gun for fuel or parts. He loved seeing his grandchildren taking up the ropes to help in a business he started so many years ago. In everything Francis did in his life his biggest love was music. His singing and guitar playing delighted so many throughout the years. His heart was happiest plucking away for an audience. Francis and Helen even had their own band “The Country Cousins”. They played at many different venues. Whether it was dances at night clubs, weddings, New Year’s Eve, if you named an outing that music was going to be played, they were there. Francis also played in the “Great Northern Opry”, with many other talented local musicians. He wrote many of his own songs and music over the years. These tunes will be treasured forever. Francis was always a reader and story teller. He loved to tell stories of his life growing up on the farm. Tales of trials and hardships, love and perseverance. He passed on his knowledge of life and family and community in his tales. His stories never got old. No matter how many times he told them. He even spent his later years writing his own book to forever capture his life's tales. Francis’s favorite morning past time was drinking coffee and telling these tales. For years it was with the crew at the local station. His jokes and laughter adding flavor to a lifetime’s worth of moments. The last few months coffee was with his kids and his grandchildren. Wonderful stories and tales and laughter that will forever live on in our hearts. Always a gentleman and cowboy, Francis loved his horses and dancing. He felt the rhythm and music of life in everything he did, and he moved to the beat of his own tunes. The movement of a good horse, and feel of a good dance partner never ceased to fill him with happiness. We are certain he is dancing in Heaven, reunited with his beloved Helen. Francis took his family and community to heart. He was a pillar to so many and was involved in so many organizations. He belonged to the Bethany Lutheran Church, the American Legion (continuous 67 yrs.), The Amvets, and the Covington Historical Society. He also served several terms as President on the Covington School Board. He was on the Baraga County Soil Conservation Board, MI/WI Timber Producers Association Board, and the Musicians Union. Francis was also one of the founding members of the Michigan Association of Timberman, that helped create MATSIF (Michigan Association of Timberman’s Self Insurers Fund) Although Francis is in the arms of his beloved wife Helen, once again telling tales and laughing with his parents, Howard Sr and Mary, his brother Howard “Bub”, and sisters Leila and Norma. He is sorely missed by his surviving family. Sons Paul (Donna) Younggren of Watton MI, Dan (Rose) Younggren of Covington MI, Greg (Cindy) of Covington MI, and Daughter Kathleen (Harry) Miron of Covington MI. Grandchildren Jason, Jonathan, Michelle, Frankie, Carli, Erin, Gus, Tyler, Willow, Jack, Jesse, Angie, Jenna, Max, and Raymond. Great Grandchildren Summer, Jackson (JJ), Trevor, Addison, Brady, Lily, David, Iylah, Harmony, and Gunnar. Brother-in-law Bill (Norma) Virta of Trout Creek, and Sister-In-law Lila Virta of Florida. And so many nieces and nephews and cousins. Francis, you will forever live on in our hearts, and someday we shall meet again. Spring interment and graveside services for Francis will be held at 1 pm, Saturday, May 23, 2020 in the Covington Cemetery, Covington, MI. A celebration of Francis's life will be tentatively held in July and announced at that time. Francis’s obituary may also be viewed and condolences sent to the family at www.reidfuneralservicechapel.com The Reid Funeral Service and Chapel, L’Anse has been entrusted with the funeral arrangements.

The family of Francis P. Younggren created this Life Tributes page to make it easy to share your memories.

Send flowers to the Younggren family.