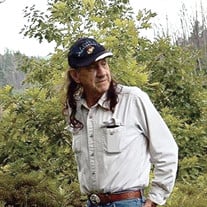 Frederick “Fred” Dakota age 84 of Baraga, Michigan passed away at his home in Baraga on Monday, September 13, 2021. He was born in Zeba, MI on June 10, 1937 the son of the late Fred Cote and Rose Dakota. Fred attended L’Anse area schools. He was a member of Keweenaw Bay Indian Community. Fred served in the United States Marines for 6 years and was one of the first M60 machine gunners. He moved to Chicago for a while, then worked at Pettibone Corp. in Baraga and test drove machines off the line. He had to make a decision between working at Pettibone or the Tribe and he choose to work for the Tribe. Fred became Tribal Chairman in 1970 and served as Tribal Council President from 1970 until 1982 and 1990 until 1997. He was a Tribal Council member in 1968, 1969, 1984, 1987, 1988, 1989, 2004, 2005, 2006, 2008, 2009, 2010, 2011, 2012, 2013, 2016, 2017 and 2018. He started his own casino in Zeba on New Year’s Eve, 1983 with a gaming license he got from the Tribe. One year later he built the Pines Bar and Casino in Baraga. After 16 months his casino closed and he was hired by Lac Vieux Desert Casino as manager. Fred is fondly remembered as the Father of Indian Casino Gaming. He enjoyed gardening, watching the Green Bay Packers, of which he was a part shareholder and patrolling “The Rez”. Fred is survived by his loving family, wife Doris Dakota of L’Anse, children Dale Dakota of Baraga, Barb Dakota of Mount Pleasant, Brad (Cherie) Dakota of Baraga, Popcorn (Scott) Mayo of Baraga and Suzie (Terry) Kahkonen of Baraga, 18 grandchildren, 29 great grandchildren, 1 great-great grandchild, brother Freddy Jo (Joanne) Cote of Baraga, sisters Kathy Lanczy of Baraga, and Doris Herrera of L’Anse and his special friend Dolly Sapcut of Baraga. He was preceded in death by his parents, son Mickey, grandson D.J. Dakota, granddaughter Nikki Rantanen and infant brother Gregory Hovinen. Funeral services for Fred will be held at 3 p.m. on Friday, September 17, 2021 at the Reid Funeral Service and Chapel, L'Anse with Pastor Dave Snyder officiating. The family will greet friends at the funeral home on Friday from 12 p.m. until the time of the funeral service. Immediately following the funeral service, interment will take place in the Pinery Cemetery with traditional native drumming and Baraga County area veterans, under the direction of the Baraga American Legion Post #444 conducting graveside military honors. A luncheon will follow at the Baraga American Legion Post #444. Fred’s obituary may also be viewed and condolences sent to the family at www.reidfuneralservicechapel.com The Reid Funeral Service and Chapel, L’Anse has been entrusted with the funeral arrangements.

The family of Frederick "Fred" Dakota created this Life Tributes page to make it easy to share your memories.

Send flowers to the Dakota family.