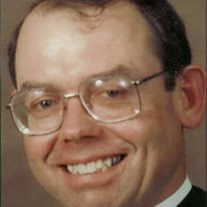 GARRY E. TOLLEFSON, age 67, entered into eternal life on Friday, September 26, 2008 after a very courageous 4 year battle with A.L.S.(Lou Gehrig Disease) He was born in Pequaming, MI. on August 27, 1941 the son of the late Harry and Martha (Thoreson) Tollefson. Garry graduated from L'Anse High School in 1959. He served in the US Navy from 1959 to 1962. Garry married his lifelong companion Helen LaFernier on Jan 25, 1964 in L'Anse. He had worked for Briggs Transportation Co, Northwoods Timber Co, Celotex Corp., C.C.I., and the US Postal Service as a L'Anse mail carrier for over 24 years, retiring in 1989. Together with his wife Helen and their children they owned and operated the Baraga Drive in for 24 years, the Quincy View Apartments and the Halliday Apartments in L'Anse. Garry was a devout member of the L'Anse Baptist Church serving the Lord in all aspects: Deacon, Sunday School Superintendent, Awana Leader, Sunday School Teacher, Choir Director and Song Leader during the services for many years. He loved to glorify God through music singing tenor in the Northland Gospel Trio, and the Lightkeepers Quartet. Garry was also a member of L'Anse American Legion Post 144 and was secretary for the NALC. He was an outdoors enthusiust including, hunting at the “Hardtimes Palace”, fishing, trapping and most of all spending time with family, grandchildren, and many friends. Garry will be greatly missed as a loving husband, a godly influence as a father, and grandfather, uncle, and mentor------- a real role model. Mr. Tollefson is survived by his loving wife, Helen, children, Garry (Anna) Tollefson of Marquette, Beth (David) Dix of L'Anse, Angela (Randy) Danison of Chassell, and Chad Tollefson of Baraga. The grandchildren shared a close relationship with grandpa and they brought joy to his life; Abbie and Isabel Tollefson, Jordan, Samuel, Cassie and Sarah Dix, Sydney, Eli and Paige Danison, brother, Harlan (Shirley) Tollefson of L'Anse, sisters, Pat Halverson of Minneapolis, MN., DeeDee (Robert) Hilker of Owatonna, MN, and Sandra Tollefson of Owatonna, MN. Numerous nieces, nephews and cousins also survive. Funeral services for Mr. Tollefson were held at 11 a.m. Wednesday, October 1, 2008 from the L'Anse Baptist Church with Pastor Jerry Bishop officiating. Interment took place in the L'Anse Evergreen Cemetery. The family received friends on Tuesday, September 30, 2008 at the Reid Funeral Service and Chapel, L'Anse from 6 until 8 p.m. and will for 1 hour prior to the service at the church on Wednesday. Baraga County Area Veterans, under the direction of the Baraga American Legion Post 444 conducted military honors in the funeral chapel Tuesday evening at 6:30 p.m.

GARRY E. TOLLEFSON, age 67, entered into eternal life on Friday, September 26, 2008 after a very courageous 4 year battle with A.L.S.(Lou Gehrig Disease) He was born in Pequaming, MI. on August 27, 1941 the son of the late Harry and Martha... View Obituary & Service Information

The family of GARRY E. TOLLEFSON created this Life Tributes page to make it easy to share your memories.