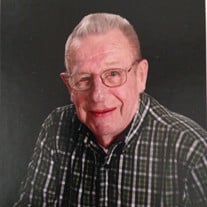 Glen R. Eilola, age 75, of Pelkie, MI, passed away Tuesday, February 23, 2016 at UP Health System, Marquette. He was born in Hancock, MI on June 3, 1940 the son of the late Raymond and Fannie (Kohtala) Eilola. Glen graduated from Baraga High School in 1958. Following graduation he served in the National Guard. Glen married the former Alma Byykkonen in Pelkie, MI on September 9, 1961. She preceded him in death on February 25, 2009. On July 21, 2009 he married the former Carol Gravier at Immaculate Conception Catholic Church in Watersmeet, MI. Glen had been employed at Baraga High School as a bus driver until his retirement. He was an active member of Mission United Lutheran Church, Pelkie and a former member of the Pelkie Volunteer Fire Department and Baraga County Fair Board. Glen was an avid fisherman and enjoyed playing cards, especially pinochle. Glen is survived by his loving wife Carol Eilola of Pelkie, son Ron (Michelle) Eilola of Pelkie and daughter Karen (David) Harris of Tapiola, grandchildren James, Tia (Robert) and Jesse, great grandchildren Thor and Isabelle, brothers Don (Joyce) Eilola of Marion, Ohio and Gale (Barbara) Eilola of Pelkie, sisters Jane Berner of Hancock and Faye Jennings of California, and numerous nieces, nephews and cousins. He is also survived by his fishing buddy, Frank Gourneau of Twin Lakes. Glen was preceded in death by his parents, his 1st wife, Alma, his son John and his granddaughter Cami Harris. A memorial funeral service for Glen was held at 12 noon on Thursday, March 3, 2016 at Mission United Lutheran Church with Pastor John Autio officiating. The family received friends at the church on Thursday from 10 a.m. until the time of the service. Immediately following the memorial funeral service, the family invited friends to join them for fellowship and a luncheon at the church. Spring interment will take place in the Pelkie Cemetery.

Glen R. Eilola, age 75, of Pelkie, MI, passed away Tuesday, February 23, 2016 at UP Health System, Marquette. He was born in Hancock, MI on June 3, 1940 the son of the late Raymond and Fannie (Kohtala) Eilola. Glen graduated from Baraga High... View Obituary & Service Information

The family of Glen R. Eilola created this Life Tributes page to make it easy to share your memories.

Send flowers to the Eilola family.