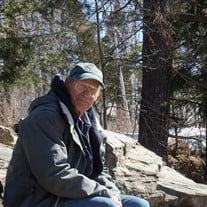 Gordon Hunter Bohochik, age 68, of L'Anse, MI passed away on Tuesday, July 23, 2019 at Baraga County Memorial Hospital, L'Anse, MI. He was born in Cudahy, Wisconsin on August 25, 1950, the son of George and Loraine (Lueneburg) Bohochik. Gordon graduated from Oak Creek High School in Wisconsin. He was a skilled tradesman over the years and had recently worked at D&H Welding in L’Anse. Gordon was a resident of the area for the past 20 years. He enjoyed hunting, fishing, working on cars, hiking in the woods, 4-wheeling, doing anything outdoors and having a beer with his friends. Gordon is survived by his loving daughter Bonnie (Jess) Curry of Wisconsin, grandchildren Kevin and Caleb, his mother Loraine of Wisconsin, brothers Glenn, Gary, Guy, George, Gon and Grainger, sisters Georgie, Gail, Gulie, Gia, Gared, Gayde and Gwen. Several nieces, nephews, and cousins, numerous friends and extended family also survive. He was a friend of the Keweenaw Bay Indian Community. He was preceded in death by his son Samuel, his father George and his brother Grey. A celebration of Gordon’s life will be held on Thursday, August 1, 2019 from 2 p.m. until 3 pm. at the Reid Funeral Service and Chapel, L’Anse. Gordon’s obituary may also be viewed and condolences sent to the family at www.reidfuneralservicechapel.com The Reid Funeral Service, and Chapel, L'Anse, MI has been entrusted with the funeral arrangements.

The family of Gordon Hunter Bohochik created this Life Tributes page to make it easy to share your memories.

Send flowers to the Bohochik family.