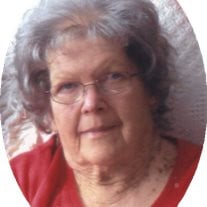 HELEN M. JOHNSON, 81, of Covington, passed away Thursday, February 23, 2012 in Milwaukee. She was born in Watton, MI on June 1, 1930 the daughter of the late Isaac and Emma (Mantiniemi) Torma. Helen attended elementary school in Watton and graduated from L’Anse High School. She married William A. Johnson on June 20, 1953. He preceded her in death in January 2003. Helen worked for the Covington and Watton Co-op stores for many years. She was then employed as a rural mail carrier for the US Postal Service, retiring in 1990. Helen was a lifelong member of Trinity Lutheran Church, Covington. Her greatest joy was spending time with her grandchildren and great grandchildren. Helen enjoyed cooking, and baking for her family whenever they visited. Grandma’s rieska was their most requested item. She also enjoyed games of Yatzee and Scrabble with her neighbors and family as well as her daily crossword puzzles. Mrs. Helen Johnson is survived by her children Susan (Douglas) Scott of Cornell, MI. and Sharon (Wayne) Manz of Milwaukee, WI, grandchildren Bradley (Lisa) Manz of Kenosha, WI, Brian (Kimberly) Manz of Germantown, WI, Jacqueline Manz of Milwaukee, WI, Daniel Scott of US Naval Base, Bremerton, WA, and Sarah (Jon Kovar) Scott of Marquette, MI, great grandchildren Donovan VanErt, Nadia Manz, Kailey Manz, and Sawyer Manz, sister Bertha Torma of Watton, sisters-in-law Viola Manninen of Ironwood, Vienna Forslund of Ironwood, Aileen Johnson of Negaunee, and Helmi Johnson of L’Anse. Numerous nieces and nephews also survive. She was preceded in death by a sister and brother, Hilda and Paul. Funeral services for Mrs. Helen Johnson were held at 11 a.m. Friday, March 2, 2012 from Trinity Lutheran Church, Covington with Pastor Mark Reinsch officiating. Spring interment will take place in the Covington Cemetery. The family received friends on Thursday, March 1, 2012 from 5:30 p.m. until 7:30 p.m at the Reid Funeral Service and Chapel, L’Anse and at the church on Friday from 10 a.m. until the time of the service.

HELEN M. JOHNSON, 81, of Covington, passed away Thursday, February 23, 2012 in Milwaukee. She was born in Watton, MI on June 1, 1930 the daughter of the late Isaac and Emma (Mantiniemi) Torma. Helen attended elementary school in Watton and graduated... View Obituary & Service Information

The family of HELEN M. JOHNSON created this Life Tributes page to make it easy to share your memories.

Send flowers to the JOHNSON family.