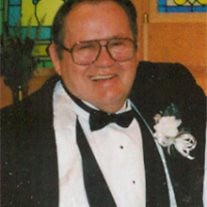 HENRY A. VERVISCH, 70, of Covington, MI. passed away Friday, January 5, 2007, at Marquette General Hospital following a 10 month illness. Henry was born August 2, 1936 in Detroit, MI., son of the late Henry J. and Doris (Hart) Vervisch. He was raised in Detroit and attended area schools. Henry was a veteran of the U.S. Marine Corps after serving 4 years. He was employed by the U.S. Postal service as an accountant until his retirement in 1991. On June 17, 1972, he married the former Peggy Maki in the Sacred Heart Catholic Church in L'Anse. He was a former member of St. Alfred's Catholic Church in Redford, a current member of St John's Lutheran Church in Redford and an associate member of Bethany Lutheran Church in Covington. He was a member of the Covington Post of the Am-Vets. Moving to Covington in 1992, Henry was a counter for the Ojibwa Casino in Baraga. He enjoyed flowers, gardening and riding his lawnmower. He was devoted to watching old-time movies and loved talking to all that he met. Henry is survived by his loving wife of 34 years, Peggy, his son Ken (April) Vervisch of Alston, grandson, Nathaniel, brothers Robert of Oldsmar, FL., Douglas (Kathy) Vervisch of Inkster, MI., sister-in-law Elaine Vervisch of Hawaii, brother-in-law Howard Maki of Romulus, MI., and several nieces and nephews. A brother, Ronald, preceded him in death. A memorial funeral service was held at 2 p.m. Tuesday, January 9, 2007 from Bethany Lutheran Church in Covington with Rev. Scott Williams officiating. The family greeted friends at the church from 1 p.m. until the time of service. Spring interment will take place in the Covington Cemetery. Memorial contributions in Henry's honor may be directed to the family. The Reid Funeral Service and Chapel, L'Anse, assisted the family with arrangements.

The family of HENRY A. VERVISCH created this Life Tributes page to make it easy to share your memories.

Send flowers to the A. VERVISCH family.