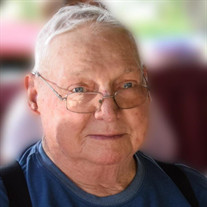 Henry T. Johnson, age 88, of Skanee Michigan passed away Wednesday, October 21, 2020 at Baraga County Memorial Hospital, L’Anse. He was born in L’Anse, Michigan on May 17, 1932 the son of the late Thure and Mary (Destrampe) Johnson. Henry attended L’Anse area schools. He proudly served in the US Army during the Korean Conflict. On September 15, 1953 Henry married the former Marlene Dault in L’Anse. She preceded him in death on February 17, 1998. Henry had been employed at the former Celotex Corporation as a forklift operator until his retirement. He was a member of Sacred Heart Catholic Church, and the L’Anse American Legion Post #144. Henry enjoyed hunting and going to “the Bus”, fishing, making wood, watching the Red Wings, Tigers and Lions. He loved keeping is cookie jar full for his grandchildren and great grandchildren. Henry is survived by his loving children, Bob “Mouse” (Brenda) Johnson of Skanee, Rick (Lisa) Johnson of L’Anse, Mona Collins of Skanee and Tom Johnson of Skanee, grandchildren James, Jeff, Dano, Kate, Jamie, Heidi, Bryan, Mike, Dean and Megan, 13 great-grandchildren and brother Leonard (Sue) Williams of Ohio. Numerous nieces, nephew sand cousins also survive. He was preceded in death by his parents, his wife, sisters Shirley, Marilyn and Laverne, brother Donald and son-in-law Smokey. A celebration of life visitation for Henry will be held from 1 p.m. until 3 p.m. on Thursday, October 29, 2020 at the Reid Funeral Service and Chapel, L’Anse. Masks will be required and please remember to practice safe social distancing. Henry’s obituary may also be viewed and condolences sent to the family at www.reidfuneralservicechapel.com The Reid Funeral Service and Chapel, L’Anse has been entrusted with the arrangements.

The family of Henry T. Johnson created this Life Tributes page to make it easy to share your memories.

Send flowers to the Johnson family.