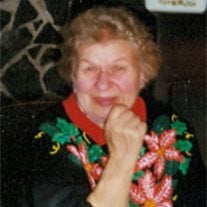 IMPI I. NIEMI, 84, of Pelkie passed away suddenly Thursday, October 4, 2007 at Baraga County memorial Hospital. She was born in Pelkie, MI. on October 27, 1922 daughter of the late William and Hilma (Hamilianen) Lappala. Impi attended school in Pelkie. She married Paul Niemi in Hancock on August 14, 1943. Together, they worked the farm, tending to dairy cattle and other farm animals. Mr. Niemi preceded her in death in 1982. In her leisure time, Impi loved to garden and care for her family. Mrs. Niemi is survived by her loving children, David (Cheryl) Niemi of Chassell, Raymond (Cindy) Niemi of Pelkie, Carol (Ken) Friess of Menominee, and Judith (Howard) Lister of Chassell, grandchildren, Krystal, Jason, Michael, Raymond Jr., Marcus, Pamela, Jenifer, Janice, Julie, Jessica, and Jon, great-grandchildren, David Price, Jaclyn, Jade, Jeffrey, Taylor, Justina, Jackson, Dylan, Paul, and Derrian, and her brother, Emil (Ethel) Lappala of Chassell. She was preceded in death by her granddaughter, Stacey in 2001. Funeral services for Mrs. Niemi were held at 11 a.m. Monday, October 8, 2007 at the Reid Funeral Service and Chapel, L’Anse with Pastor John Autio officiating. Interment will take place in the Askel Cemetery. The family greeted friends at the funeral chapel on Monday from 10 am until time of the service. Following the service, the family invited friends to join them in a farewell reception and luncheon in the Harrington Gathering room located at the funeral home.

The family of IMPI I. NIEMI created this Life Tributes page to make it easy to share your memories.

IMPI I. NIEMI, 84, of Pelkie passed away suddenly Thursday, October...

Send flowers to the I. NIEMI family.