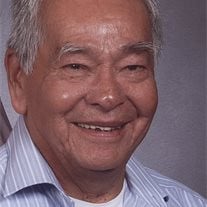 Isadore "Blu" Misegan, age 83, of Zeba, MI passed away Sunday, February 24, 2013 at his home with his family by his side after a long illness. Blu was born on October 6, 1929 to John and Hattie (Spruce) Misegan in Zeba. He attended the Zeba Foote School. He enlisted in the US Navy sailing with the Pacific Fleet. After receiving an honorable discharge he married Marie Salo in 1959. They moved to Lower Michigan where Blu graduated from Greene's Barber College. Blu and Marie had four children Duane, Mark, Lynn and John and moved back to the Upper Peninsula in 1975. Blu then worked at a barbershop at KI Sawyer Air Force Base. In 1977 Blu and his family moved to L'Anse and he established his own barbershop, which he ran until the mid 80's. He also served as a Tribal Conservation Officer from 1977 to 1979. After closing shop Blu ventured into the casino business becoming the Lead Slot Tech at the Ojibwa Casino until his retirement in 2000. In 2000 Blu married Ann Durant and gained step-daughters Carolyn and Mary Lou Jossens. Blu was a member of the Keweenaw Bay Indian Community and served as a Tribal Council member for twelve years. He was also the Chairman of the Ojibwa Housing Authority for many years. He was a member of the Zeba Indian Mission United Methodist Church, Ojibwa Senior Citizens and a proud member of the KBIC Veteran Honor Guard and enjoyed attending events with them. Blu was an avid Detroit Lions fan. He loved bingo or "work" as he called it and went as often as he could. He enjoyed playing slots and traveling to casinos. He was concerned about fellow Veterans and had an interest in providing for them. He had a great sense of humor and loved to make people laugh. His family was very important to him and he loved them unconditionally. Blu is survived by his son Duane and his wife Jennifer of L'Anse, his son Mark of Baraga, his daughter Lynn Haataja and her husband Randall of L'Anse, and his son, John and his wife Sharon of Marquette, and their mother, Marie Salo of Zeba; step-daughters Carolyn and Mary Lou Jossens; grandchildren Heather, Travis, Hannah, Jennie, Jake, Deena and Kristina, great-grandchildren Aleeyah, Destin, Alan and Liam; step-grandchildren Anthony, Johnny, Emily, Luanne, Veronica, Jackie, Joey, Jake and Abby; step great-grandchildren Asalia, Lucas and Preslee. Also surviving is his sister Patricia Hickman of Lake Orion, Michigan and Annabelle Decota of Baraga, numerous nieces, nephews and many friends. He was preceded in death by his parents, his wife Ann, his brothers Alan, Cecil and David, and sisters Doris, Myrtle, Alice, Dorothy and Rolene, and infant grandson Charlie. Funeral services for Blu were held at 11 a.m. on Friday, March 1, 2013 at the Reid Funeral Service and Chapel, L'Anse with Reverend Steve Rhoades officiating. The family greeted friends at the Reid Funeral Service and Chapel on Thursday, February 28, 2013 from 5 until 8 p.m. A parish prayer service was recited at 7:45 p.m. Visitation continued on Friday from 10 a.m. until the time of the service. Baraga County area veterans, under the direction of the Baraga American Legion Post #444 conducted military honors on Friday morning at 10:30 a.m. Following the funeral services; the family invited friends to join them for fellowship and a luncheon at the Ojibwa Senior Citizens, Baraga. Spring interment will take place in the Pinery Cemetery, L'Anse.

Isadore "Blu" Misegan, age 83, of Zeba, MI passed away Sunday, February 24, 2013 at his home with his family by his side after a long illness. Blu was born on October 6, 1929 to John and Hattie (Spruce) Misegan in Zeba. He attended the Zeba... View Obituary & Service Information

The family of ISADORE G. "BLU" MISEGAN created this Life Tributes page to make it easy to share your memories.