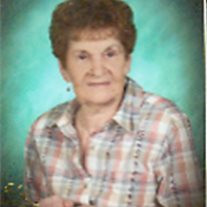 JEAN M. WUORNOS, 90, of L'Anse, MI. passed away Sunday afternoon March 29, 2009 at Bayside Village. She had been a resident there for 3 years. Jean was born in Skanee, MI. on August 7, 1918 the daughter of the late Joseph and Mabel (Longworth) Erickson. She graduated from Skanee High School in 1933. In 1967 Jean attended Northern Michigan University and was a graduate of the L.P.N. Program. Jean worked for a while at the DeSota Automobile Plant in Detroit. She then worked as a L.P.N at the Teaberry Hospital in Macomb County, retiring in 1984. Jean enjoyed cats, gardening, growing flowers, watching birds, doing bead work, and cooking. She loved music and playing the organ and other instruments. Jean was amused at having been crowned the “Potato Queen” of Baraga County in her younger days. Mrs. Wuornos is survived by her loving children, Carl (Linda) Wuornos of Sherwood, WI., and Jayne (Patrick) Axelson of Duluth, MN., grandchildren, Heather, Carie, Jeremy, and Kristin, great grandchildren, Sienna, Juliet, Mason, and Audrey, sisters, Loreen Eliassen of Marquette, and Ethel (Ronald) Kovala of Skanee. Several nieces and nephews also survive. She was preceded in death by her sister, Ansel in 2009, and brothers, Norman, and Glen. She was also preceded in death by her pets, “Whitey and Harvey.” Funeral services for Mrs. Wuornos were held at 2 p.m. Wednesday, April 1, 2009 at the Reid Funeral Service and Chapel, L'Anse with Pastor John Henry officiating. Spring interment will take place in the Skanee Cemetery. The family received friends at the funeral chapel on Wednesday from 12 Noon until the time of the service. Memorials in Mrs. Wuornos's honor may be directed to the Alzheimer's Foundation. Envelopes are available at the funeral home. Following the service the family invited friends to join them for fellowship and a luncheon in the Harrington Gathering room, located at the funeral home.

JEAN M. WUORNOS, 90, of L'Anse, MI. passed away Sunday afternoon March 29, 2009 at Bayside Village. She had been a resident there for 3 years. Jean was born in Skanee, MI. on August 7, 1918 the daughter of the late Joseph and Mabel (Longworth)... View Obituary & Service Information

The family of JEAN M. WUORNOS created this Life Tributes page to make it easy to share your memories.