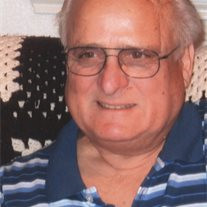 JOHN E. WRIGHT, 73, of L’Anse, MI., passed away Tuesday, February 14, 2012 at Marquette General Hospital following admittance. He was born in Lansing, MI. on November 22, 1938 the son of the late Paul and Shirley (Stringham) Wright. John attended Sexton High School in Lansing. He served in the US Army. John married the former Sharon Docking in Lansing, and they were married for over 50 years. He worked in the parts department for GM. He retired in 1994 and then he and Sharon moved to L’Anse. John was a member of the Baraga American Legion Post #444. He enjoyed bowling, fishing on Lake Gogebic, hunting and taking walks. John loved traveling to Las Vegas. His grandchildren, Breanna and Anthony were the apple of his eye. Mr. Wright is survived by his wife Sharon, son Jon Wright of Winterhaven FL, daughter Lisa (Antonio) Villalon of San Antonia, TX, and grandchildren Breanna, and Anthony. Several nieces, nephews and other family members also survive. He was preceded in death by an infant daughter Brenda Jean, and his 2 brothers. Funeral services for Mr. Wright were held at 11 a.m., Monday, February 20, 2012 at the Reid Funeral Service and Chapel, L’Anse with Reverend Steve Rhoades officiating. The family greeted friends at the funeral chapel on Monday from 10 a.m. until the time of the funeral service. Baraga County area veterans, under the direction of the Baraga American Legion Post #444 conducted military honors at the funeral chapel on Monday at 10:45 a.m. Interment will take place in the Deepdale Cemetery, Lansing, MI. Following the funeral service, the family invited friends to join them for fellowship and a luncheon at the Baraga American Legion Post 444.

The family of JOHN E. WRIGHT created this Life Tributes page to make it easy to share your memories.