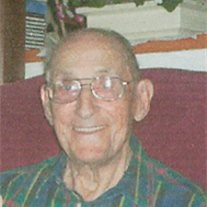 JOHN "JACK" MARNICH, 92, of Sidnaw, MI. passed away Wednesday, May 3, 2006 at Baraga County Memorial Hospital, Skilled Nursing Unit. He was born in Painesdale, MI. on May 1, 1914 son of the late Thomas and Anna Marnich. Jack graduated from Jeffers High School where he starred in basketball and baseball. In his early years he was a member of the Civilian Conservation Corps. (CCC). He was promoted to clerk of District 2 in Baraga. On November 4, 1939 he married the former Jeanette L. Pequet in Sidnaw. Jack was a veteran of WWII and was involved in the European Theater of operations. He was discharged with a rank of Master Sergeant in 1946. Following his discharge he was employed by the Michigan Department of Conservation. When the Michigan Department of Conservation was reorganized to the Michigan Department of Natural Resources he was promoted to District Supervisor of the Administration Division. He retired in 1984 after 40 years of service. Jack served on the Duncan Township Board of Review. He was a member of St. Francis Catholic Church, Sidnaw and the Covington VFW Post 4985. He loved gardening and raised his own flowers and tomato plants. His other outside activities included bowling at the Whirl-I-Gig and the Bruce Crossing lanes. Also, he was an avid ice fisherman and for years his white tepee tent was a fixture on the Alberta Pond. Mr. Marnich is survived by his loving wife, Jeanette, children, Theresa (Don) Wirtz of L'Anse, and Thomas (Sherry) Marnich of Mt. Morris, IL., grandchildren, Sean (Jeanette) Wirtz, Mick (Kerstina) Wirtz, Derek Wirtz, Diane Wirtz, and Johnaton Marnich, great-grandchildren, Tyler Wirtz, Taryn Wirtz, Mickey Wirtz, and Bryce Friisvall, sisters, Kathryn Marnich of Ft. Meyers, FL. and Rose Pelon of Hancock. He was preceded in death by his sisters, Louise Marnich, Frances (Marnich) Fulton, Ann Marnich, and Antonia Marnich. Funeral services for Mr. Marnich were held at 1 p.m. Monday, May 8, 2006 at the Reid Funeral Service and Chapel, L'Anse with Father George Maki officiating. Interment took place in the Sidnaw Cemetery. The family received friends at the funeral chapel on Monday, May 8, 2006 from 11 a.m. until time of the service. Baraga County Area Veterans, under the direction of the Baraga American Legion Post 444 conducted military honors at 12:30 p.m. The Reid Funeral Service and Chapel, L’Anse, MI. has been entrusted with arrangements

JOHN "JACK" MARNICH, 92, of Sidnaw, MI. passed away Wednesday, May 3, 2006 at Baraga County Memorial Hospital, Skilled Nursing Unit. He was born in Painesdale, MI. on May 1, 1914 son of the late Thomas and Anna Marnich. Jack graduated from Jeffers... View Obituary & Service Information

The family of JOHN J. MARNICH created this Life Tributes page to make it easy to share your memories.