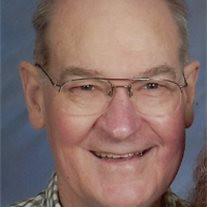 JOHN PATRICK "JACK" MARINICH, 69, of L'Anse, passed away Saturday morning, August 25, 2007 at Baraga County Memorial Hospital following a lengthy illness. Jack was born in L'Anse on December 31, 1937, son of the late John and Agnes (Campeau) Marinich. Jack attended high school in L'Anse and was a 1956 graduate. He worked for a time at the Celotex plant, later for the old Chevrolet garage as a mechanic. Jack then was employed by the U.P. Power Company in 1970 until retiring in 1993. On June 18, 1960, he married the former Carol Richmond at the Sacred Heart Church in L'Anse. In his leisure time, Jack enjoyed woodworking, crafting items from cabinets to birdhouses. He was a member of Sacred Heart Catholic Church, Knights of Columbus, and the International Brotherhood of Electrical Workers. Jack is survived by his loving and devoted wife, Carol, son Patrick John of L'Anse, and daughter Chris Ann Nelson of Tempe, Az.., brothers James Marinich and special friend Lynn of Ishpeming, Roger (Kathy) Marinich of Kingsford, MI., Lee Marinich and special friend Nancy of L'Anse. He is also survived by honorary grandchildren Emily and Johnny, brother-in-law Michael (Jaynie), many aunts, uncles, nieces, nephews and cousins. Jack was preceded in death by his son David Michael in 1986. A Mass of Christian Burial was celebrated at 11 a.m. on Tuesday, August 28, 2007 from the Sacred Heart Catholic Church with Fr. Augustin George, celebrant. Interment will take place in L'Anse Evergreen Cemetery. The family received friends at the church on Monday evening, August 27, 2007 from 6 until 8 p.m. and on Tuesday from 10 a.m. until time of the Mass. A Knights of Columbus rosary service was held on Monday evening at 7:30 p.m. at the church. In lieu of other expressions of sympathy, the family suggests memorials in Jack's honor to the Sacred Heart School. The family has entrusted the Reid Funeral Service and Chapel, L'Anse with arrangements.

The family of JOHN PATRICK"JACK" MARINICH created this Life Tributes page to make it easy to share your memories.