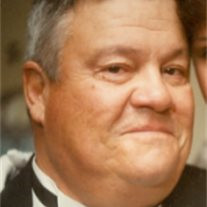 JOSEPH H. "JOE" ROSS, 80, former Baraga Village Superintendent, of Baraga, MI. passed away Thursday, February 16, 2006 at his residence following a lengthy illness. He was born in Baraga, MI. on September 3, 1925 son of the late Francis and Celia (Groshe) Ross. A lifetime county resident, Joe graduated from Baraga High School in 1943. He entered the US Army in December 1943. Joe served during the Rhineland Central Europe Campaign. He received several field decorations including two Bronze Battle Star Medals and the Bronze Star Medal. Following his discharge from the service, Joe worked as a truck driver for Pettibone and was employed for a time at Celotex. In 1968 he was hired as the Baraga Village Superintendent, a position he held until his retirement in 1987.He also served as a volunteer fireman for the department. Joe married the former Joan Meyer in Utica, MI. on September 4, 1970. He was a member of St. Ann's Catholic Church, Baraga and the Baraga American Legion Post 444. Joe was an avid hunter and fisherman, and did independent logging for a time. He was skilled at making furniture and enjoyed collecting maple syrup. Mr. Ross is survived by his loving wife, Joan, children, David (Barbara) Ross of Gladstone, Joseph F. (Renee) Ross of Painsdale, Tom Macke of Baraga, Shirley Ross of Colorado, Nancy (John) Ross of Rhode Island, and Janet (Bruce) Ross of Baraga, 9 grandchildren, and 2 great-grandchildren. Numerous nieces and nephews also survive. He was preceded in death by his son, his wives Shirley Selden and Pauline Kinnunen, and several aunts and uncles. A memorial service for Mr. Ross was held at 11:30 a.m. on Thursday, February 23, 2006 at the Reid Funeral Service and Chapel, L'Anse with Father George Maki officiating. Spring interment will take place in the Baraga Cemetery. The family received friends at the funeral chapel on Thursday from 10 am until time of the service. Baraga County Area Veterans under the direction of the Baraga American Legion Post 444 conducted military honors at 11 a.m. followed by the Baraga Volunteer Firemen honor review at 11:15 a.m. The family invited friends to join them for fellowship and luncheon at the Baraga American Legion Post 444 following the services. The family has entrusted the Reid Funeral Service and Chapel, L'Anse with arrangements.

JOSEPH H. "JOE" ROSS, 80, former Baraga Village Superintendent, of Baraga, MI. passed away Thursday, February 16, 2006 at his residence following a lengthy illness. He was born in Baraga, MI. on September 3, 1925 son of the late Francis and... View Obituary & Service Information

The family of JOSEPH H. "JOE" ROSS created this Life Tributes page to make it easy to share your memories.