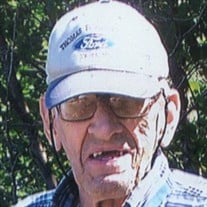 Jack W. Elliott, age 92, of L’Anse, passed away Monday, April 24, 2017 at Oscar G. Johnson VA Medical Center in Iron Mountain, Michigan. He was born in Rhinelander, Wisconsin on April 30, 1924, the son of the late Lewis and Mamie (Head) Elliott. Jack graduated from Rhinelander High School in 1941. He then served in the US Mariner Merchant Marines. Jack married the former Joyce M. Plymesser in Wisconsin in 1983. She preceded him in death on May 11, 2015. He was a member of the L’Anse American Legion Post 144. Jack enjoyed going to the Casino, fishing, hunting, traveling, and in his earlier years trapping and camping. Jack truly loved his former job at the L’Anse Sentinel delivering the newspaper. Jack is survived by his loving daughters Ellen Mayle and Debbie Mulari of L’Anse and Zindy Hall of Baraga, grandchildren Jack, Danara, Greg, Donus, Tierin, Troy, Aja, Katie and Diane, numerous great grandchildren, sister-in-law and brother-in-law Mickey and Daniel Pinkson and special friend Helen Kolberg and family. He was preceded in death by his parents, his wife, 2 grandchildren and best friend Spike Kolberg Private family services will be held.

The family of Jack W Elliott created this Life Tributes page to make it easy to share your memories.

Send flowers to the Elliott family.